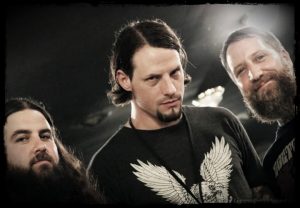 As Brimstone Coven prepares for a trip north to play Day One of New England Stoner and Doom Festival (5/3 at Altones in Jewett City, CT), the blog sent them some questions about their music.  Here’s what guitarist Corey Roth had to say about occult mysteries delivered in three-part harmonies….

How has the band’s sound changed between Black Magic and What Was And What Shall Be?

After the departure of our lead singer, we had to re-think our vocal approach to some degree. To accommodate our live performances, we also had to revise the writing process somewhat. As far as musically, I don’t think we’ve changed all that much except for tweaking our recording methods here and there.

You released your most recent album on your own. Will this be your way of releasing new music going forward? Or would consider working with a label again?

I think that we would consider working with a label again, if it was beneficial for both parties. However, it is nice to not have to jump through any hoops or meet any particular deadlines and/or delays. We have a cycle and timeline that works for us.

Unlike many other bands in your genre, Brimstone Coven is known for having strong three part harmonies. What made you decide to do this in the first place? Also, why do you stick with it? What is its appeal?

Three-part vocal harmonies were the plan from the very beginning. I believe it has made us stand out from other bands and when it’s done right, it’s undeniably beautiful. You can expect to hear plenty of that from us in the future.

As a follow up, when you write the music, do you map out the vocal parts ahead of time, or does that come later on in the process? What is your process for writing music?

The majority of the writing process comes from being stoned and improvised riffing out on guitar. When I’m feeling a particular riff, a lot of times the vocal melodies and sometimes even lyrics will manifest themselves on the spot. Like the universe is handing it over. It’s always nice when that happens. Of course, there is always some extra thought and revision that goes into it throughout the demo process and furthermore through rehearsal and recording.

The band’s lyrics deal with the occult and the dark side of folk legends. What draws you to this subject matter?

I’ve always been drawn to that type of thing, even as a small child, as if it chose me. My grandmother and mother were practicing witches before I was even born, so I believe that had a lot to do with it. I’ve always had a strong desire to learn more about the occult and why it was so prominent in my life.

You’ll be appearing at the upcoming New England Stoner Doom & Fest. How did you get hooked up with the fest? Also, are there any bands you want to see?

We’ve been up that way a couple times already and have made some awesome friends. We are definitely stoked to be sharing the stage again with our good friends in Curse the Son, Black Road, and Shadow Witch. We’ve played with so many of these bands already and we’re always excited to see them again!

Do you think fests like this one help keep the underground going strong? How so?

Absolutely! These fests are incredibly important to the scene and the genre. Obviously our genre isn’t exactly mainstream, and probably never will be, but I think that’s just one of the things that make it so special to the people involved. It’s like our own little sub-culture. The gathering and fellowship of like-minded people is incredibly Important for obvious reasons.

Have you started thinking about a follow up to What Was And What Shall Be?

Indeed! We already have a handful of songs written and demos recorded. The songs are in steady rotation at rehearsal and you may even hear a couple of them at a show real soon!

Get your NESDF single-day and weekend passes here.