Editor’s Note: Matt Bacon is a music journalist, marketing guru, and the founder of Dropout Media, a full service management and label services company.  Follow him on Instagram and Twitter to learn music industry social media strategies and more.  Read below as he pulls back the curtain on a certain sci-fi TV obsession….

I’m writing this in a Klingon bathrobe. I take my calls on either a TNG style communicator OR a TOS one (Depending on the century I feel like being in on a particular day). Next to me sits my cat, who is named after James T Kirk. This morning before checking the news or email I went and looked at a thread I’ve been following on r/DaystromInstitute, a subreddit for discussing the minutiae of Star Trek. I seek to run my company as a Star Fleet captain might, and I may or may not secretly harbor ambitions of not only having an office modeled after Picard’s ready room, but making my employees wear Star Trek uniforms to work. I REALLY REALLY care about Star Trek you guys. Welcome to my Nerd Talk.

My mom was a serious Trekkie, and is especially a fan of Seven of Nine. My grandfather also has had a long time fondness for the show. I clearly remember the first Star Trek episode I ever saw, it was ‘Take Me Out To The Holosuite” season 7 episode 4 of Deep Space 9, known to many as ‘the baseball episode’. I remember being a kid and fascinated with the costumes. I remember being rapt at Star Trek exhibits in museums. I also remember watching the episode ‘Galaxy’s Child’ (TNG, S4E16 for those keeping notes at home!) as a kid and being thrilled at the drama. However it wasn’t until I was 15 years old that I started to take the show seriously. 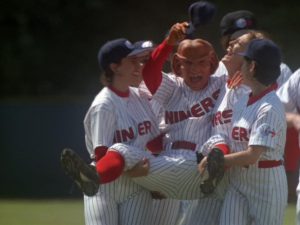 When I started I knew that I wanted to start from the beginning and watch it all the way through, do it properly. That was nine years ago. I finally finished all 33 seasons of the show (Yes, including The Animated series!), 778 episodes earlier this year. I’ve been trying to watch a few other shows and revisit favorite episodes before I head right back to the beginning and start it all over again. It’s been a constant in my life. The thing that’s really crazy though is that in the last two and a half years, which is when things really got weird, because my living situation allowed for binge trekking, I watched somewhere in the order of 22 seasons of the show. This is with a travel schedule that sees me gone around 100 days a year. So again – I REALLY like Star Trek.

I think what’s always attracted me to the show has been this sense that we can be better. That we can unite and create a better future, regardless of how our different personalities might clash or the struggles we face. I love how the show forces characters not just to adapt, but to embrace situations that  they are deeply deeply uncomfortable with. One particular highlight for me has always been The Next Generation episode where Worf has to deliver Keiko’s baby. It so perfectly captures the sense of personal growth within the characters, but also the playful humor the show has always had. (This is compounded in DS9 when O’brien tells Worf that Keiko is once more having a baby to which Worf replies with deep shock and concern, “Right now!?”) Few other shows have had the same level of emotional depth, with characters sitting down and trying to resolve their interpersonal problems in a meaningful way. How many other space epics see characters dedicating entire episodes to talking about their feelings? The fact that you could immerse yourself in this ridiculously huge universe was only a plus.

The depth of the universe was in fact I think a big reason why I always preferred Star Trek to Star Wars. Star Wars, while excellent, always felt like a bit of a hodgepodge. Maybe I’m not deep enough into the lore, but Star Wars can’t, as far as I understand it compete with the sheer AMOUNT of content that Star Trek has. 778 hour long episodes is nothing to shake a stick at! Having this incredibly mass of episodes that span across seven decades also means the show has explored a much broader variety of themes – from trans rights (All the way back in the early 90s!) to goddamn Tribbles. To say nothing of the fact that the show had both the first interracial kiss AND the first lesbian kiss on television. Star Trek has consistently broken boundaries that no other show would touch for more than half a century, and the new series, Star Trek Discovery and Star Trek Picard only compound this excellence.

@zakkmild took this photo of me a few years ago and I still love it. At this point we were having slumber parties 2-3 times a week and basically living at Saint Vitus Bar. If you like death metal and are in the nyc area then attend his festival @necrofestny In a couple weeks! . . . . #startrek #trekkie #startrekmerch #scienceofficer #nerd #nerdlife #spock #uniform #starfleet #starfleetuniform #enterprise #starship #scifi #scifinerd #startreknerd #tng #ds9 #thenextgeneration #deepspace9

So yes – I know this article has been scattered, but I get excited talking about Star Trek the way I get excited talking about music. These are the two things that have defined my life since my teenage years and I spend basically every possible minute completely entrenched in one or the other. Star Trek teaches us to be better people. It shows us a future that is bright, and where we have learned to combat our human flaws. In the aliens we find reflections of ourselves and in the bridge crew we learn to cooperate with others. There’s simply so much to unpack and it is almost too much to even contemplate. What can I say other than go out and take a voyage on the Starship Enterprise!