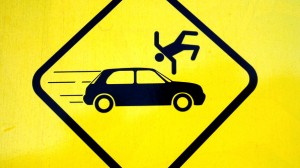 What the fuck, Fairfield County? What is happening on our roads? Everyone is bonkers behind the wheel. And I’m not even talking about the idiots on their phones texting. I mean people are shitting all the rules of the road. Never mind common decency, decorum, civility and respect. They’ve all been chewed up, masticated and incinerated by the driving public and the leftover matter is what they’re shitting on the rules.

This past weekend we narrowly avoided getting into a three car accident with a young lady on I-95. Apparently she misunderstood the meaning of the paint in the road and thought you didn’t have to merge into traffic from the breakdown lane until you were a car length away from a broken down vehicle. My husband hit the brakes because the dog was with us. If he had been driving alone he would have gunned it. Our truck is a tank and Miss Thing would have needed Daddy to buy her a new car. As I screamed what fucking body part I thought she was out the window she shrugged like it was nothing. I wanted to kill her. I wanted to take those stupid hipster sunglasses off her smug horse face and shove them down her throat. Sideways.

But it’s not just her, it’s everyone. If you’re trying to take a left and the opposing traffic is stopped at a light drivers will continue to pull up to the car in front of them, blocking the road or driveway you need to turn into. When people are pulling out into traffic they actually pull out into traffic before they look to see if it’s safe to pull out into traffic. Fuck the people on the road. And double fuck any pedestrian, bike rider, stroller, bottle guy or Chinese food delivery man on a moped who comes by at the wrong time.

There have always been bad drivers. People driving luxury cars have always been assholes. But Fairfield County has undergone a proliferation of these self-absorbed shit-bags and it just keeps getting worse. Newsflash! There are other people in the world! And I’m sorry I have to use such an old joke but apparently it’s been a while since these people paid attention to anyone other than themselves.

We all have places to go. That’s why we’re in the car. No one is taking a leisurely drive on 95. We have someplace to be and we’d like to get there in one piece.

Come on, folks. We’re all in this life together. Have a little consideration for the other people on the road. Try following the rules. And the paint that people work so hard to put on the road during the worst possible times. It’s there for a reason, to keep us in line because cars kill. Over 32,000 people in 2011. And if car accidents only killed rich bitches with ugly sunglasses who openly flout the rules of the road I might not mind so much. But, in reality, they kill children, babies, young people and old people and maybe even people’s dogs. So stop it.