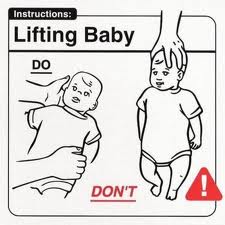 It’s unfair of me to write an article that’s pro-children if I were to use examples of my life A.C. (After Children) No one chooses to have kids, knowing full well what they’re getting themselves into unless they’ve spent a large chunk of their lives raising someone else’s kids. So maybe Nannies, Au Pars and Assistants to the Stars know what it’s like to have children without actually having any children. Good or bad, if you rail about life with children after having children, then that really does a disservice to those on the fence about having children of their own. Allow me to recreate my life before children. (B.C.)

My wife and I met when we were 23 years old. Five years later we became husband and wife. I’m aware that’s a bit of a lengthy wait, but I’m kind of slow to the draw at times. Through those five years, my wife made it clear to me, not in any kind of demanding way, that she wanted children, but she wanted to enjoy being married without kids for some time. I, of course, agreed.

We went out to dinner most of the week. We would go to late-night movies. My wife is a darn good artist and she would have the time to create pictures and do projects for others. I was able to sit and write for hours on end. I created several short films and one feature. Life was good. We had fun. We enjoyed each other. (Get your mind out of the gutter!)

When we were out, we’d see families. We’d leer at the parents of loud, screaming kids. We shook our heads at parents who let their kids run around the grocery store. We shushed parents of kids in movie theaters that couldn’t keep their kids quiet during the show.

I would go to bed at 2 a.m. every night. I would awake somewhere between 8 and 9 a.m. each morning. I’d get to relax around the house, maybe read the paper, play a video game, watch a movie, write some more. Life was good.

We had Veronica. Since that day in September of 2006, we have added two more lovely children to the household: Penelope and Dexter.

Why did we do it? Why did we want to essentially end our lives and dedicate the bulk of our existence to raising children into adults? At its core, I had kids because my wife wanted to have kids. I’m not as heartless as that seems. I did want to be a father, but in a “Hey, I’d like to be a Dad someday,” kind of way. I never waxed philosophical with my friends on the joys of raising a child. But having kids was a next logical step in our life together as husband and wife. If I didn’t want kids, I would’ve told my wife when we were dating that I was against it and she would’ve probably broken up with me.

But I didn’t. Like I said, I did want to have kids. But why? It can’t just be a purely selfish reason on my part to want children. To be a Dad? Is that the only reason? I asked my wife this question for the article and she told me was that she always wanted to be a Mom. Is she selfish, too? Are we two egotistical fools who thought having children would somehow make our lives more meaningful?  Were we looking for the status symbol of being parents?

When someone I know, usually younger than myself, tells me that they’re having a child, I ask them, “Are you ready to no longer be the most important person in your life?” That’s the choice you make when you become a parent. You’re main objective is to raise your child the right way and give him/her the tools needed to live in this world and make it better. It’s the greatest job you will ever have. It’s a calling you cannot ignore and run away from. You’ve chosen to accept this responsibility and it goes to the type of person you are by the way you handle this responsibility.

Yes, people fail at it daily. They have children and decide that they’re a burden and a drain on their own personal existence. Shocking as it may seem, but there are some really terrible parents out there. I don’t like them as much as the next childless person and if I think about that poor child who has no chance at learning how to live in this world from the one or two people who are meant to show them this valuable piece of information, I’d go crazy. I’d probably adopt forty kids. The only thing I can do is focus on my three kids and hope they grow up to influence others and the world in a positive way.

A few things I learned since having kids…

Kids will scream even if you’ve done everything you can to appease them — and sometimes, the screaming is just a by-product of you putting your foot down. They can’t have everything in life and they need to learn that. Granted, I’ve had to remove my children from public places in order to let them get this message. I’m not foolish enough to think everyone else needs to witness the tantrum.

I won’t take my children to a movie until I know they’ll sit still and be quiet. It could be a long time for that.  For dining out all together, we usually we choose a family-friendly place that’s cool with food on the floor, on the table, on the walls. (Hey, I clean it up before we go.)

Those dinners my wife and I used to go to are now under the guise of ‘Date night’ and right now, they are few and far between. No complaints. I chose this life and I accept it.

I no longer can sit for hours writing, but that doesn’t mean it’s not getting done. On the contrary, organization is my middle name as I’ve written several screenplays, a play, a novel and two on-line shows. It’s called Time Management and if having kids did anything, it improved my skills in that department. And I have mad time management skills.

I fall asleep around 12 a.m. now, if I’m lucky enough to stay awake and I’m up every morning by 7am, the latest.

Life was good during the B.C. times and now in A.C. times, it’s great.