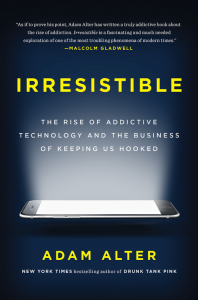 I’m one of those suckers who thinks my life will be ideal as soon as I stop doing everything I like and start doing all these other stupid things, like eating kale at every meal and waking up ten minutes earlier to meditate.  Drinking and a pointless social smoking habit are usually on my To-Stop list, but lately the time I spend attached to my smartphone has caught the eye of my Inner Perfectionist Yogi.  The phone is the first thing I look at in the morning; I feel relief when I sneak a minute to check it at work.  I marvel at the fact that for the first twenty-seven years of my life, I was able to exist without it.

And that vague sense that I could be spending a lot of my time differently has led me to Adam Alter’s new book, Irresistible: The Rise of Addictive Technology and the Business of Keeping Us Hooked.  Alter explores various behavioral addictions from social media and wearable fitness trackers to World of Warcraft, gambling, and online shopping — basically, being addicted to an action rather than a substance.

What all addictions have in common is that the substance or behavior triggers the release of dopamine in the brain.  With behavioral addictions, especially gambling and social media, the unpredictable reward of a win or a like keeps users coming back again and again.   Michael Zeiler found this in his famous 1971 pigeon study, where he observed that pigeons would press their food button furiously when it only dispensed pellets 50-70% of the time.  When food came every time or not often enough, the pigeons became disinterested.  But in that zone of random feedback, “they  pressed almost twice as often when the reward wasn’t guaranteed.  Their brains, as it turns out, were releasing far more dopamine when the reward was unexpected than when it was predictable.”  (127)

The Social Interaction chapter hit closest to home, focusing a section on my favorite app: Instagram.  I’ve had a smartphone since April 2012; I happened to purchase it shortly before getting married and Instagram was one of the first apps I downloaded.  Some of my earliest shares were of my beautiful bridesmaids, posted days after Facebook purchased the app from its creators for literally a billion dollars.  In the time that’s passed, Instagram has done a lot better than my marriage, increasing its users from two million to about three hundred million.  (216)  Like the pigeons pressing the button for pellets, IG provides users with inconsistent feedback that keeps them/us coming back for more.  (218)  Although the two circumstances are unrelated, it’s depressing to think that my relationship with this photo-sharing app has outlasted the one with my former husband; Alter notes, however, that addictive behaviors and “misguided love” have many of the same characteristics.  (87)

Instagram was just a small part of the book, though.  The insights on mobile devices, environment, and behavioral architecture were thought-provoking, and there were actionable suggestions for changing habits.  To start weening myself away from “Phoney,” I bought a couple clocks and downloaded Moment to track the time I spend using apps or texting. (13)  (Moment doesn’t count time making phone calls or screen time on other devices, like when I watch five Forensic Files episodes in a row on my laptop.  And yes, I see the irony of using an app to spend less time using other apps, writing a blog post about my experience, and then sharing that blog post on social media….)

But — spoiler alert — Irresistible’s  most startling bit of information was on the first page: Steve Jobs did not let his kids use iPads.  That’s right, the genius Apple co-founder and creator of the iPad wouldn’t let his own children touch one.  He knew that he had created a vehicle for addiction and he wouldn’t allow even the chance of them getting sucked in.

I don’t think it’s a coincidence that now that after giving us Proles a few years to become “hooked,” net neutrality regulations are soon to be repealed.  This means that internet service providers will be able to charge more for users to access specific websites, among other nefarious changes that inhibit freedom of expression and access to information…  In other words, if you want those dopamine hits, you’re gonna have to pay extra.  Maybe my Inner Perfectionist Yogi just wants me to “stick it to the man” by changing my habits before some billionaire makes even more money off them.

For more on how The Man is controlling what you consume, read up on media consolidation and the Sugar Conspiracy.

Do you feel tethered to your smartphone, or other habits that make life less ideal than it should be?  What do you think is really behind the upcoming repeal of net neutrality?  Let us know in the comments below.