What would you think if the United States government colluded with the tobacco industry to encourage the sale of cigarettes?  Or if Michelle Obama got behind the podium and told Americans that it was okay to drink as much booze as they wanted, as long as they drank a bottle of water at the end of the night?  Completely ridiculous… Or is it?

My suspicions about sugar began with an Advocare 24-Day Challenge.  An important part of the diet is cutting out added sugar.  As I started reading the labels of the food in my cabinets and fridge, I realized that this was nearly impossible — or at least very effort-intensive.  Sugar wasn’t just in the obvious places; it was also hiding in foods that aren’t “sweet,” like bread, bagels, English muffins, salad dressing, jarred pasta sauce, pasta, ketchup, canned soup… You get the idea.  I bought some sugar-free salad dressing (pretty good) and sugar-free marinara sauce (flavorless and disgusting), but I couldn’t completely cut out processed bread products.  Oh well.  Still managed to lose five pounds. 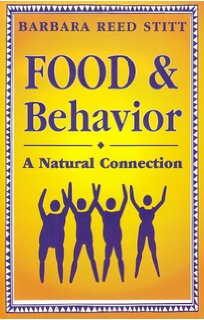 So during the course of this diet, I mentioned to my dad that I was avoiding sugar.  He perked up and told me about a book he’d recently read called Food & Behavior: A Natural Connection.  First published in 1983 as Food, Teens, & Behavior, former probation officer Barbara Reed Stitt tells how a whole foods/clean-eating diet changed the lives of her probationers.  Basically, this lady thought up the Advocare diet more than twenty years before Advocare even existed and forty-five years before I started following clean-eating Pinterest boards.  She found that a whole foods diet (combined with counseling) kept 80% of her clients from returning to jail.

Stitt used personal anecdotes to illustrate her point, but she also included plenty of empirical evidence about the benefits of a clean diet as well as information about how food affects the body.  For instance, Stitt explained how fiber slows the absorption of sugar into the bloodstream, which is why it’s healthier to eat an apple than, say, a candy bar.  Even though sugar is sugar, a.) the apple has way less sugar than the candy bar in the first place, and b.) the fiber in the apple prevents the insulin gymnastics that would be caused by the candy bar.   And “insulin gymnastics” are bad because they bring on mood swings and food cravings, which in turn leads the hungry person to eat more junk, which restarts the cycle of reactive hypoglycemia. (That’s the extremely short version — for more on this, see pages 36-41.)

“But Jessie, what does this have to do with the government?”  We’re getting there.

Between Food & Behavior and the Advocare diet, the effects of sugar became a topic of interest for me.  So when I noticed a documentary on Netflix called Fed Up, about the childhood obesity epidemic, I had to watch it.  Narrated by Katie Couric, the 2014 film explains the connection between food advertising and food industry lobbyists.

Another extremely short version: no one’s paying the government to put America on a clean-eating diet.  In fact, even though sugar is just as addictive as smoking, food and beverage companies are allowed to cram their products down people’s throats with abandon.  Pun intended.   And now one out of three American children are overweight or obese, as well of 69% of American adults.  That’s more than two-thirds of our population!

To pretend to address this public health crisis, the government sponsors placating baloney like the Let’s Move campaign.  But Fed Up explains that the real issue isn’t calories in versus calories out — as Margo Wootan, director of nutrition policy for the Center for Science in the Public Interest, puts it, “We’re not going to exercise our way out of the obesity epidemic.  To burn off just one 20 oz Coke, a child would have to bike for an hour and fifteen minutes, and most people don’t have that much time in their day.”

The film goes on to explain how calories from soda are absorbed into the body compared to calories from almonds.  The fiber in the almonds causes their calories to be absorbed slowly.  But soda, devoid of fiber, causes an immediate blood sugar spike; the liver reacts to this unnatural state by converting the sugar directly into fat.  Over time, sugar consumption also stresses the pancreas, which leads to type 2 diabetes.  Before the 1980s, this disease was also called “adult onset diabetes” — but it’s become common enough in children that the nickname no longer applies.

So, sugary food and drinks are a large contributing factor to the obesity epidemic and the debilitating health problems that come with it.  And sugar has been proven addictive, just like cigarettes, alcohol, cocaine… One would think that the government would take steps to discourage sugar overconsumption, like banning food advertising to children (hook ’em early!) or at least mandating a warning label on bottled soft drinks.

That’s where the conspiracy comes in.  The government has consistently squashed information about diet’s connection to obesity, to the point of revising official reports at the behest of food lobbyists!  Even Michelle Obama’s seemingly helpful advocacy for children’s health has been shaped by lobbyists.  Her original message focused on diet, changing food products, and changing how food is marketed.  So the food manufacturers said, “Sure, we’ll help!” and did a bunch of nonsense that didn’t improve the nutritional value of their products or change their child-focused marketing strategies.  And now Mrs. Obama emphasizes exercise, which isn’t the real solution.  “It’s about how active our kids are,” she says.  But it’s not.  Watch the movie.  It’s pretty messed up.

My main takeaway from Fed Up, aside from the government conspiracy, is a simple math fact: four grams equals one teaspoon.  (Why do you think American food is labeled with a measurement system that means nothing to most Americans?  Food industry lobbyists.  Government conspiracy.)  So when I eat a Thomas’s Everything Bagel with 7 grams of sugar, I may as well be spooning 1 3/4 teaspoons of sugar into my mouth.

Let’s look at some other examples:

Yep, the milk in that government-sponsored free lunch has 4 1/2 teaspoons of sugar in it.  The kids have a choice to pick white milk, but what five-year-old do you think takes white milk over chocolate?  From the anecdotal evidence I’ve collected during cafeteria duty, exactly none.  Remember what we learned in Food & Behavior about how sugar spikes cause mood swings?  Yet the government feeds small children liquid sugar in the middle of the school day.

My jury is still out on Advocare — I joined their pyramid scheme to get a discount on Spark, their fake-sugar energy drink that I now can’t live without.  Unsurprisingly, the diet’s effects go away once you stop taking the magic beans and resume drinking beer and eating all the things you like.  But Spark, for better or worse, is here to stay.  I can say, though, that trying the Advocare diet led me to learn about the Great Sugar Conspiracy.  If nothing else, at least now I can defend myself!