Editor’s Note — This is the second in a series on a hobby that’s pretty freakin’ metal: birding.  (That’s “bird-watching” for all you noobs who don’t even have a Slayer patch on your battle vest.)  Read “Birding is So Metal, Part I: Finding the Scene” here.

Just over a year into my birding career I was at Cove Island Park when suddenly the most beautifully colored bird I’d ever seen flew in front of me and landed on a bush. I picked up the camera and pushed the button, I didn’t even try to focus, and I was right to because the bird flew instantly away. When I got home I saw a blurry picture of something red, blue and green. What the heck is it? I posted the blur to Facebook and very shortly I had my answer: a Painted Bunting. Extremely rare for our neck of the woods, it should have been wintering in Mexico but instead it was here in tropical Stamford, Connecticut.

I was pretty happy with my find, but I didn’t understand the enormity of the situation until the next day. As I stood in the same place, patiently waiting for my bird to reappear a couple of men approached me. One with binoculars and one with a camera lens that may weigh more than I do. “Are you Vanessa?”

For weeks after my initial sighting that section of Cove Island was teeming with birders from all over the state, lined up for hours waiting for a glimpse of the Painted Bunting. I was incredibly annoyed by the whole thing. Every day I went back to look for the bird after work and every day everyone would be there. Laughing and chatting and really making it very unlikely that any bird was going to come into view. Eventually they’d peel off and go home. “He’s not coming out today. He likes to make an appearance around 10:30. Now it’s 3:00.” Goddammit. I work from 10:30-1:30. I’m the reason they all know the bird is here and I can’t get a good look!

I went early on a weekend day and stood on the tennis court waiting to get a 10:30 showing. I didn’t. But I did get sick from the guy next to me chain smoking.

The American Birding Association has rules for birding. I think not smoking needs to be added.

I went home sick to my stomach from the smoke. Without seeing the bird.

The next year, around the same time I was driving home from work at 11:00 (my hours had changed) and I saw the same two birders with the binoculars and the camera lens that weighs more than I do standing in the same spot looking towards the woods. “Shit,” I muttered to myself. “The bunting is back.”

The Painted Bunting eventually took up residence in the driveway of the man with the huge camera who happened to live across the street. Every morning birders from all over would stand in his driveway and see my bird. When I finally had a morning off I pulled up in my car and stared out the window with my binoculars. I felt awkward, even though I’d seen people in his driveway for weeks. I didn’t want to be “that guy” even though “that guy” was clearly welcome. Eventually his wife came out. “Are you looking for the bunting?” “I am!” She told me it was okay to get out of the car and stand in the driveway. She showed me the branches it was last seen on and wished me luck. Within minutes I had my first private session with the Painted Bunting. It was spectacular — both the bird and the generosity of the people that lived there, for being willing to share the beauty of this unlikely visitor with anyone that showed an interest. 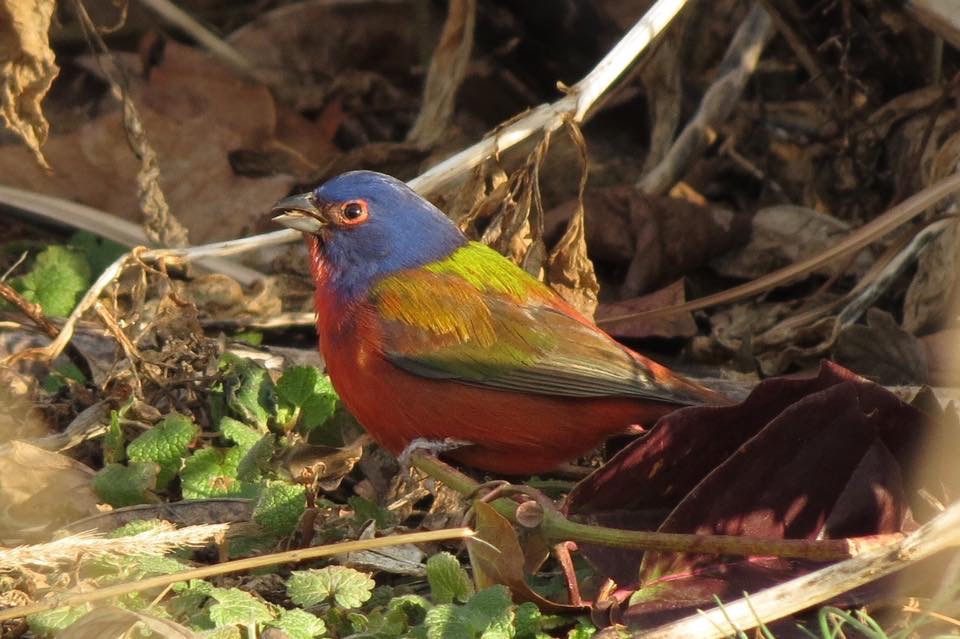 That was a good lesson for me to learn. Patience and grace will pay off.