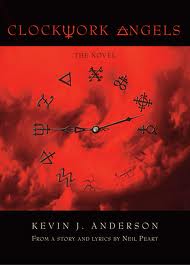 Being a complete Rush fanatic, it’s no wonder why a novel written directly off of the concept of Rush’s new album Clockwork Angels went straight to the top of my reading wish list. The novel Clockwork Angels was written as a collaboration between Kevin J. Anderson and Neil Peart. I’m not too familiar with Kevin J. Anderson’s work (and I’m sure a few sci-fi fanatics would punch me because of that ignorance), but I am familiar with Neil Peart’s work. And I’m not talking just about his lyrical abilities; he’s also an accomplished writer with a few books of his own. His need to write about imaginative and fantastical subjects had been retired for quite some time since the late 70s, so of course I was excited to learn that he was working on a fantastical steampunk-inspired concept for the new Rush album. Learning later about the concept being developed into a novel, I went raving and drooling over to my computer on its release day, selecting the two-day shipping option from Amazon.com.

Clockwork Angels is a steampunk novel – in other words, it’s part of a literary genre that incorporates a weird mixture of futuristic science fiction and sort of a wild-wild west steam power mentality. It’s been said that the setting in this type of literature resembles a Victorian view of the future. And indeed in this story, many of the miraculous flying machines, trains, and ships are run by steam and powered by a strange chemical called “coldfire,” the result of alchemy experimentation. It’s a rich and colorful world filled with metal and gold and fire. A melding of futuristic technology with technological mentalities of the past.

Without giving away too much, the story involves a young man in his teens. The world he lives in is run by a dictator called “Watchmaker”, who maintains society by restraining the aspect of freewill. Every single facet of everyone’s life is put under clockwork scheduling, and each person’s purpose is strategically placed so that the gears of society move cleanly and safely. This control goes beyond meddling in human affairs, and even includes the weather. Clouds are manipulated to drop rain only at appropriate times, and never too much or too little. In this way, society is kept in a safe zone, and people are kept happy under the assurance of rigid planning.

The protagonist lives a happy life in a village, but gets the urge that there must be something more, something that he’s missing. So to put it quite simply, he goes out on an adventure. An adventure for the sake of it really, just to have stories for his people back home. He gets mixed up in a lot of unfortunate situations along the way, and the reader can expect a lot of ups and downs, and quite a bit of action and drama.

Honestly, I’m quite surprised at how much I liked the book. The story is pretty easy to read, and each character very well developed. It moves along at a fairly fast pace, provides more than enough descriptive imagery to give a vivid picture, and has a powerful, philosophic ending. It sometimes bothers me that many stories feel obligated to have a love interest included, but the one here actually feels like it fits and helps extend the complexity of the main character. Changes in the story can be a little predictable, and there are definitely inspirations from obvious sources. I see glimpses of Orwell’s 1984, Sherlock Holmes novels, and even Walt Disney films in a few instances. In some ways, I find the familiarity actually helps with the overall enjoyment. The influences come from such different sources, that it’s fun to see them all meshed together in one piece of work.

I think my biggest criticism is the fact that Kevin felt the need to quote Rush lyrics at every given opportunity. For those who aren’t familiar with their music, I guess the quotes wouldn’t seem too forced or out of place, maybe. But since I’m a fanatic, I found myself squirming every single time. And they’re not just quotes from Clockwork Angels, but from all the Rush albums. For example, there’s a scene that involves a group of carnies camping and resting before they take their carnival off to another location. Three clowns are sitting in a circle and gambling. One clown is hesitating a little with throwing the dice, and one of the others says to him, “Come on man, roll the bones!” Ugh, I wanted to throw my book at the wall. For those who don’t know, Roll the Bones is the title of a Rush album, and also the title of one of their worst songs IMO. There are so many more instances of this, and they take me out of the story every time. Yes Mr. Anderson, we know Neil Peart is involved with this book, no need to remind me every chance you get!

Given that setback however, I still find this to be a very strong story. Readers who are partial to science fiction, steampunk or even dystopian genres would probably enjoy it. I think the best thing about it for me is the fact that there’s still a band out there that cares enough about their craft to continue to create relevant and interesting output, even after being together for almost 40 years! The idea of creating a novel built around a rock album is a pretty ballsy move, one that could easily end up being disastrously pompous and self-indulgent. Both the band and author hit it out of the park with this one though, creating a story that definitely stands up on its own as a colorful work of creative writing, and a poignant social and philosophical statement.