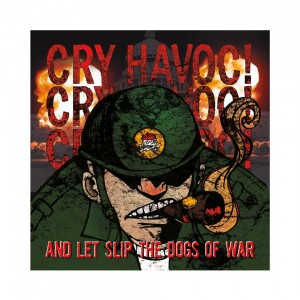 I’m not going to lie: I love Cry Havoc! so I jumped at the chance to review this album. Cry Havoc! is a band that needs to be seen to be believed – and if you’re a small girl, preferably at a slight distance because the second they start playing, no matter where that may be, the room is going to go nuts (though I did once have some spectacular bruising from being right up front once). These guys could probably inspire a punk rock riot in a nursing home where the youngest resident is 95 years old.

But how does one capture that kind of borderline unhinged energy in a recording studio? We have a singer who usually looks like he just finished a cage match with Mick Foley when he walks off stage – with blood all over his face and possibly other body parts. The floor is wet with sweat, spilled beer, and possibly more blood. And everyone is thinking “Holy shit, that was amazing.” I still can’t answer my question, but Cry Havoc! can – because they managed to bottle up that frantic energy and bring it into the studio and if you like old school, hard, fast punk rock, there’s no way in hell you can listen to this not album and do any of the following: turn it up as loud as possible, throw your fists in the air as you try to sing along with the machine gun-speed lyrics, break all the furniture in your living room, or get to one of these guys shows as soon as humanly possible.

The album kicks off with a perfectly Cry Havoc! song, “See Something, Say Something” and doesn’t quit for anything more than a nice Agnostic Front-styled breakdown or a throat-ripping guitar solo – neither of which count as quitting, mind you, through the final (secret) track that is a bad ass cover of a classic song (no spoilers here – it’s more fun to discover this one on your own.)

And hey, it’s not just Cry Havoc! We have a song featuring Ben Social from another awesome CT band, Sadplant, and the legendary Shawn Refuse is on another. Why? Because when you can take a great thing and make it greater, you just fucking do.

The best part of this, outside of the energy and the general message (I am going to find a way to change my alarm clock to Jonny screaming, “IF YOUR LIFE SUCKS SO BAD, THEN FUCKING FIX IT!” because if there was ever something to take to heart and wake up to, it may well be that line) is that this band is talented. It’s always bugged me that people think “Eh, it’s punk rock, three chords, easy, anyone can do it” – which (a) is blatantly untrue and (b) a lot of smug “accomplished musicians” who look down on punk couldn’t play this stuff on a dare. “Diseased Mind” comes to mind as an example – there’s some serious musicianship going on there. Basslines running all over the place, time changes, guitar that all but breaks my mind attempting to understand it. And there’s some extra diversity and evolution on this album – from a hardcore punk sound to a more straight up hardcore sound at times (the beginning of “It Never Ends”, for example).

All around, I’m not surprised how much I love this album. Cry Havoc! has long been of my favorite bands in the state, and I remember playing a show with them, putting makeup on in the bathroom as they finished their set, thinking, “What the hell is wrong with you,woman? Why did you decide to follow a band that cannot be followed by much of anyone, never mind your ass.” But even with high expectations, they overshot everything I was hoping for and gave me something better. You need this album. Now. https://www.reverbnation.com/cryhavocpunx And then look at their show schedule and make time, because you’re definitely going to want to go.