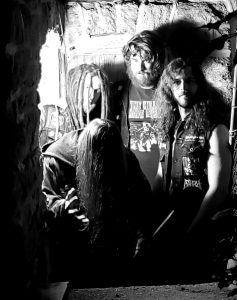 The Horde is coming! You hear a rumble in a distance. Then, a hissing choir of fallen angels on the horizon. The dusts swirls around you. Run if you can, but it’s too late. The rabid legions from the last bastion of hell are here.

Philadelphia’s Tartarus Horde is a maelstrom of high magic delivered with the most brutal intent. Their self-titled debut tape blends classic death metal grooves with technical jazz fusion, often at breakneck speeds. This band is the death metal equivalent of a 20-sided dice wielded by a fractal dungeon master.

These death metal dungeoneers run with the sword and sorcery theme in their debut, and the result is an energetic contrast of high and low art. The sword aspect of the band is their primitive style of death, similar to early Morbid Angel and Incantation. The sorcery side of this album is their bewildering storm of riffs and blast beats. This tape is like battling an undead wizard with a hammer. Most of the songs throw traditional song structures into the moat, in favor of a whirlwind of shredding, along with some of the fastest blast beats I’ve heard since Cryptopsy’s None So Vile.

There’s plenty of spooky atmosphere on this record to set the stage for high fantasy. The spoken opener, “Ritual Of The Bornless One” consists of a raspy voice, whispering demonic poetry.

“Incantation Of Dissident Tongues” swirls to life like the embers of a flame in the darkness. It’s got a nasty, slow paced riff that’s perfect for evil death metal headbanging, before before all hell breaks loose. 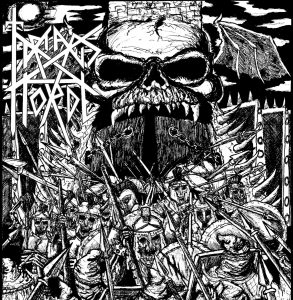 This album has its share of fun hooks, but it’s far from easy listening. One can put on an Obituary record as background music and hum along without thinking twice. Tartarus Horde demanded my full musical attention to absorb their compositions. Even after several listens from start to finish, I struggled to piece together what I had heard. Parts of this album remains elusive to memory, a quality also shared by another great death metal album, Nespithe by Demilich. The plus side is that with each listen, like Nespithe, I noticed another cool nuance from the wealth of otherworldly musicianship.  At times, Tartarus Horde’s cacophony is like a complex algebra equation in auditory form.

My one criticism of this album is its production. The guitar tone is muffled and muddy, and a bit buried beneath all the other musical mayhem. The guitar riffs are stellar, and deserve to cut through the mix, like an executioner’s blade. Often, I had the impression that the vocal parts, drums, guitar and bass were all competing to play the fastest and loudest, rather than in harmony.

Another minor criticism is the album closes with an eight-minute spoken word track. In “Ascension Of Chaotic Intellect,” a dungeon master dramatically narrates the tale of an old library keeper tasked by four hooded figures to summon a demon. At least that’s the gist I got. It’s a bit long-winded at eight minutes, and, despite my best efforts to pay attention, my mind wandered at several points. This is exactly the reason I don’t do audio books. The story culminates with the newly-summoned demon screaming with pitch-shifted vocals something spooky about the Tartarus Horde. And then…nothing. The cassette is over. I was bummed they didn’t follow up such a lengthy build up with a closing number, to end things with a bang. But it is a worthy cliff hanger, and anything that reminds me of Venom’s At War With Satan is a positive. I’m eager to hear the next chapter of death metal insanity from the Tartarus Horde, Philadelphia’s newest crop of heavy metal hellions.

Listen to Tartarus Horde at their bandcamp.

About the Author: The Necrosexual is the most electrifying man in corpse entertainment. His latest grim album The Gory Hole Overture In F# is available here.