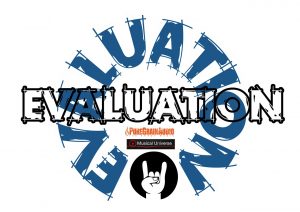 For those outside the heavy metal subculture, this genre of music may seem like a siren-song for the maladjusted.  Little academic research has been done on heavy metal, and most of that research “explore(s) it […] in the context of depression, anger, and related issues.”

But some legit PhDs have teamed up with some legit music journalists to change this negative perception.  David M. Greenberg, a music psychologist at the University of Cambridge and City University of New York , along with Brian Monteiro, a Research Teaching Specialist at Rutgers University, have collaborated with PureGrainAudio managing editor Mark Angel Brandt and PureGrainAudio/Echoes & Dust writer Nick Dunn to study how metal music preferences are related to personality traits and empathy levels.  They’ve created a survey which gauges emotional responses to clips of various metal subgenres, then compares them with responses to personality and empathy ratings.

I took the survey before sending out these interview questions, learning that I’m happy with my life and that I dislike Meshuggah even more than I dislike Korn.  What will the survey reveal for you??  Find out here — and read on for some words from its creators.

How did you select the musical samples?

Mark Angel Brandt (PureGrain Audio): This was a fairly challenging process — metal is an exceptionally diverse genre that involves a plethora of sub-genre schisms. In order to avoid having hundreds of samples of musical stimuli, we quickly realized we had to narrow down these sub-genres. First, we considered the different strands of metal, and extracted 16 sub-genres which we felt are the most prominent and recognizable styles. Then came the hard part — how do we find one or two bands that summarize a genre as expansive as “death metal” or “black metal.”  Our best compromise was to find two bands who represent different interpretations of the sub-genre. For instance, a second wave black metal band and a symphonic black metal one. When it comes to qualifying a genre like metal, there’s no real panacea, but this step-by-step process was the best way to capture the entire sonic space of metal.

Do you think seeing the album art with the music clips influences responses?

David M. Greenberg, PhD (Cambridge University/City University of New York): This is a great question and one that we are testing internally.

How are the responses to the music clips related to the personality/empathy portions of the survey?

DMG: We will be able to link the personality and empathizing-systemizing scores to affective reactions to the musical excerpts, including musical styles and fine-grained sonic and emotional features in the music.

Why did you decide to create a metal-specific survey?

MB: The genesis of this survey came independently to the general music survey that was conducted before. The initial thrust of the survey was to discuss catharsis in heavy music (with a broad focus on metal) as supporting data for an article discussing the topic. The survey underwent an evolution when we (Nick Dunn and I) got in contact with psychologist and musician Dr. David Greenberg and research psychologist, Brian Monteiro. Quickly, the conversation moved from a narrowed study of catharsis toward of expansive study about music perception, preferences, cognition, and emotional responses.

The reason we focused on metal is two-fold: there’s still comparatively little written about metal in the academic arena, and what’s published of it is typically based on data from people uninformed about the genre. Secondly, the old adage of ‘write what you know about.’

A couple of years ago, you conducted a general music survey that was similar to this one.  How much do you expect the results of the metal survey to differ?

DMG: The survey conducted a couple years ago was based on our post-hoc knowledge. However, this study is rooted in the scientific method and uses assessments and measures that have scientific validity that can be analyzed and add to the scientific knowledge and literature on music psychology. Not to mention that with this survey users receive feedback about their scores!

DMG: We begin the survey with a general assessment of music-genre preferences. This will allow us to create different comparison groups.

On a somewhat related note, how much does appreciation or dislike of various metal subgenres affect the survey results?

We do expect differences to be observed for highly engaged heavy metal fans with more passive fans, particular in their personality traits.

What are your own favorite metal subgenres?

DMG: For the purposes of prevent bias for the readers of this article and users of the survey it’s better that we not reveal this.

In what scientific journals are you hoping to publish your conclusions?

DMG: There are many journals that report on studies about the music sciences including the psychology of music. The first step will be to analyze the results after data collection and then write the results in a manuscript to be submitted to a journal.

When does the survey end?

MG: We are looking to run this survey for six months (so until January 2019), with a minimum sample of 500 people involved.

What are you waiting for, Alternative Control readers?  Let your metal flag fly and take the survey!

Also… “Your upper-mid spike is grating in my ear like an ice pick.”  But even if this guy likes Meshuggah in the end, I’m still not into it.