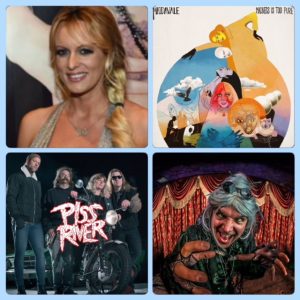 A friend and I have been having a running discussion about how gender factors into music marketing.  For better or worse, we both agree that a woman in a heavy band will garner that band more audience and media interest.  Is this a “good” thing?  Depends on who you ask — but I haven’t found anyone yet who will say it’s not true.

(Even talking about this phenomenon is tricky because it invites the Social Justice Police accuse you of being part of the problem.  I’ll put forward that acknowledging something exists is not the same as endorsing it.  But of course, there will be some problem with anything any woman does…)

Certainly no musician wants to be an advertising prop.  (Or at least, I imagine that most musicians worth their salt would place emphasis on music rather than BOOBS… I mean, a chick can’t help lookin’ good, but you wanna be able to play too.  *cough*)  And women have been used as advertising props since the dawn of time — Moses probably had a busty lady on his arm when he brought out the Ten Commandments.  The video below for Granny 4 Barrel’s song “She Likes Guns” is a perfect example.  Why did I watch this video at all?  Not because this band has actual chicks in it unless you count the dude dressed as a grandma, but because the video was directed by Stormy Daniels.  Perhaps you’ve heard of her…  Talk about advertising!

The grandma guy was interviewed in Loudwire and had this to say about the video:

“Jesse and I was in agreement that ‘She Likes Guns’ was real cool, and we wanted to put that out first, but the radio folks was like, ‘Well, guns: that’s kinda touchy, and we sure do like ‘Freak Flag.’ Why don’t we roll that out?’ But we already had the video done, so we shelved it. And we figured we were just going to wait until whenever the right time is.

In something of a (cough) perfect storm, the video combines two subjects that haven’t left the news in the past few weeks: firearms and Ms. Daniels.

“That’s some crazy shit right there!” Granny says. “I guess ‘timely’ is the right word! You can’t write this shit, you can’t make it up!”

Wow, classy move …  [Editor’s note, 4/7/18: Granny has contacted AltCtrl saying that the timing he was referring to in this quote was “Ms. Daniels” but not “firearms.”  His comments and our response are below.  He added in a later email to the blog, “Guns are in the news on a weekly basis, I’m sure that will never change. They’re always viewed in a negative way. We wanted a different perspective. To be clear, I do not support gun violence in anyway shape or form.”]  Overall, the song was repetitive and annoying, and the video gave me a headache.  The lyrics and visual content just seemed super juvenile — like, do adult men really think this is cool?  There’s nothing artistic about it.

But still, I watched “She Likes Guns” and I’m writing about it right now, sharing the video with Alternative Control’s followers.  As that same friend says, any PR is good PR — so Granny 4 Barrel accomplished their mission, even if they had to use Stormy Daniels’ rep rather than their own music to do it.

Meanwhile, I found a much more novelty in Piss River’s snow mobile race for their video “Bad Reputation.”  How did they get the shots of the snow mobile riders??  Was the cameraman literally on the back of another snow mobile?  This Swedish rock n roll band is fronted by (ahem) a “bad bitch” and is releasing a self-titled debut via The Sign Records in April.  L7 meets Motörhead with nary a thong or a corset in sight.  There’s some serious ‘stache action too — one reason you need a dude in the band every now and then.

And then we have this new video from Swedish band Maidavale, who are clearly not pandering to anybody.  Their psychedelic journey in “Oh Hysteria!” takes them into the woods for some “Light As a Feather, Stiff As a Board” — a female coming of age ritual that many of us will remember from middle school slumber parties.  Isn’t that approximately the age when we started turning against each other, vying for male attention?  Even in the title of this article, I pit women against each other for humor…  I don’t know if Maidavale thought of that when making this vid, but they must be playing on the fact that “hysteria” was once a medical diagnosis used to punish women who were out of line…  Bet ol’ Donald wishes he could use that on Stormy right about now.

What’s the point of all this?  IDK.  We cannot vanquish sexism with a single installment of AltCtrlToob.  We can, however, support musicians that rise above the lowest common denominator and scoff at anyone who tries to market shitty music with skimpy underwear.  Huzzah!

Seen any cool music videos lately?  Does your band have a video to share with the world?  Message the link to our Facebook page and it could be featured on AltCtrlToob!