It turns out that I popped Granny’s cherry.

Alternative Control’s review of Granny 4 Barrel’s video for “She Likes Guns” was, in fact, the first negative review the song has gotten.  But what Granny mainly took issue with was how the review interpreted some of her comments to Loudwire — so like civil adults (one in her mid thirties, the other… an octogenarian?) we sat down and had a fireside, er, cell phone chat about it.

It turns out that we agree on a lot of things, like the fact that Chris Cornell was extremely good-looking.  Granny talks about shock rock and its relative “shock” value or lack thereof, how she transformed from a regular metal frontman into Granny, and how ugliness has a place front and center in metal.  Listen to the unabridged interview to find out what’s going on under Granny’s bun and knitting needles:

Below are excerpts from our conversation that pertain to the “She Likes Guns” video and Granny’s thoughts on gun violence:

How did Granny 4 Barrel came to work with Stormy Daniels on the music video “She Likes Guns”?

Jesse had a relationship with — and I don’t mean like a ‘relationship’ — but he knew Stormy because she had done some stuff with Full Throttle out in Sturgis a few years back, so they knew each other.  He was like, “I got a couple of folks,” and he mentioned Stormy, and I was like, “That sounds pretty fuckin’ cool to me, let’s do it!”

So we just connected and Stormy and I did a video treatment; we talked back and forth and we did it.  This was long before she was in the news.  It was just like, “Oh wow, we just did this video with this really cool woman, it came out great.”  But then when the song got shelved because it couldn’t go on the radio, so did the video.  So we released “Freak Flag” and did a video for that.

But then it’s ten months later and saying to the boys, “I’m going out on a limb here, but if you did a video with a director and that director became super popular for whatever reason, are you gonna release it when they’re in the news or out of the news?”  So that’s the timing I’m talking about.  […]  It wasn’t contrived, it wasn’t like we said, “Stormy’s in the news, let’s get ahold of her and make a video.  […]  She is so cool — she is a legitimate cinematographer.  She is hardworking and she did a kickass job on this.  I would do another video with her, and I hope we do get to. 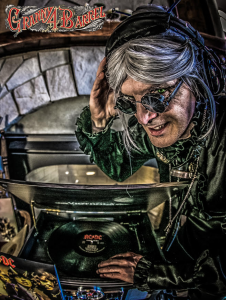 I’m not a video expert here, but I think with Stormy’s background in pornography — acting in it, directing it, and whatever else — the video came across as very pornographic.

(laughs) Yeah, I guess it could lend itself to that.

With the licking of guns —

We went down that road a little bit, but it’s imagery and Granny ain’t got a problem with pretty girls standing around with guns.  I mean, it’s cool, I ain’t worried about what anybody thinks of me.  We didn’t make anybody do this, it was a community effort.

So how is that empowering?

Well I know, let’s just keep it riding here Jessie, it’s just Granny’s interpretation.  (Jessie laughs)  If you didn’t have the video and you just listened to the words of the song, there’s a third verse stanza that comes in and says “Hammer to power / powder to force / She’ll put down a villain / on his villainous course.”  At the heart of it, this song is about a badass chick with a gun who didn’t take no shit from nobody.

(laughs) I can see that…  I mean, is this the first negative review you’ve gotten of it?

Yeah, but […] your review didn’t hurt me at all — I just wanted to clarify that I am anti-violence with guns.  I grew up around weapons […] and I’m all about gun control.  You gotta screen people out.  There’s crazy motherfuckers out there and in some states you can go in there with a driver’s license, and you know how many crazy people are driving cars.  You go into a gun shop in certain states with a driver’s license and you’re walking out with an AK-47 or whatever — I mean, that’s kinda loose!  I don’t approve of that.  I had to go through some rigorous hoops to get my weapons, and that’s what I’m all about.

I just want to say, the only issue I had (with the review) was that I don’t want to be associated with gun violence.  I know I’m talking about a hot topic and that ain’t never gonna change, it’s always there in the news every week…  But that’s all.

Fair enough…  It’s a particularly hot topic right now and sometimes your shit is gonna get construed a certain way, y’know?  But I do appreciate you reaching out to me through email and blog comment, because now I know where you’re coming from.

Towards the end of our chat, Granny said, “You know what?  Musicians, we’re all one big family.”  I agree that we often have more in common than we think.  I’ll even recommend that you check out Granny 4 Barrel’s *other* video, “Freak Flag,” featuring a carnival of metal weirdos that are empowered by their artistry and uniqueness:

Overall, we had a good conversation and I am actually a little disappointed that I won’t get to see Granny 4 Barrel’s live show when they tour this spring.  If the band puts this much effort into their videos, their stage show must be a trip! 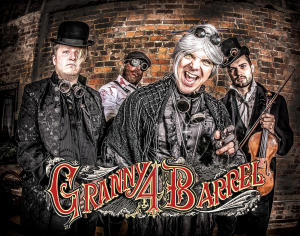