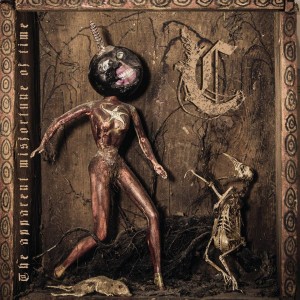 With their third studio release, New Haven, CT metal band Cyperna has solidified their distinctive sound.  Marked by intricate rhythms, stabbing dissonance, and JT Stoyak’s characteristic shrieks and growls, their upcoming EP The Apparent Misfortune of Time is a fitting follow-up to their 2014 full-length The Darker Side of Matter.

If Cyperna’s music was a painting, the palette would be black, gray, and blood red.  The EP is a near-constant assault: violent guitar riffs punctuated by Stoyak’s demands.   Opener “Destroyer of My Seed” slows down in the bridge and “Moonlight Acquisition” has a bass interlude in shades of blue and green, but those are listeners’ only respites.  It would be hard to name a band in our local scene that is harsher or more unforgiving. 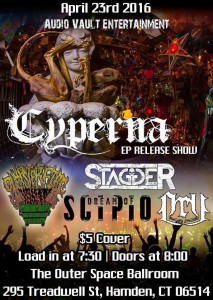 While Cyperna has the indiscriminate aggression of a .50 cal machine gun, they also possess the precision of a sniper rifle.  The production on Misfortune is spotless — in particular, the bass drum and toms have a deep, full tone that stands in contrast to the piercing guitars and vocals.  Drummer Shawn Cavanaugh must be happy with that!  He said of their recording sessions at Lancaster, PA studio Atrium Audio, “It’s a very friendly environment and they seem more like bandmates rather than engineers you’re paying to record you. They have successfully produced great quality albums for us over the years and we will continue that friendship into the future.”  Engineers Grant McFarland and Carson Slovak are no strangers to metal and metalcore; they have their own Star Wars-themed metal band Galactic Empire, and recorded August Burns Red’s Grammy-nominated track “Identity.”

But back to Cyperna…  Cavanaugh and Stoyak are joined by Steve Barrett and Mike Pinto on guitar and Jay Madore on bass.  (Madore and Cavanaugh also play together in the instrumental metal band Kali Ma.)  The Apparent Misfortune of Time will be available April 23rd, with a release party that night at The Outer Space in Hamden.  The boys will be joined by Dream of Scipio, Stagger, Dumpster Fire, and PRY in what is sure to be an awesome and deafening celebration of their hard work.

Review copy of The Apparent Misfortune of Time provided by the band.  All opinions are our own.