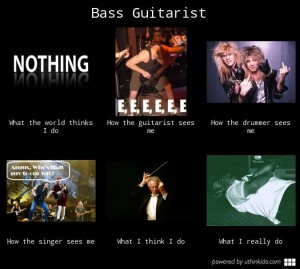 In a move that will leave a gaping hole in the entire Connecticut music scene, er, a tiny blip in the bar band circle of one Connecticut city, I’m taking a break from playing in bands.  It might last six months, it might last until somebody really wants Pink Missile to play a show with them because God-knows-shows-can’t- happen-without-Pink-Missile-on-the-bill… Or if I “accidentally” get knocked up, the break might even last forever!

The main reason for taking this time off is that I need to focus on my last semester of graduate school without distractions — but aside from that practical aspect, it’s easy to become too concerned with the organizing side of playing in a band. I just want to sit on my floor and write songs that I like, not worry about turnout or drumsets. A breather from the non-musical aggravation will help me clear my head and come back creatively refreshed.

I have to admit that there’ll be a lot of little annoyances I won’t miss during Hiatus: sending nine thousand Facebook and text messages to secure a four-band lineup, inviting my very patient friends to “events” over and over again, waking up on Sunday with no money because I spent it all at the bar…  And the worst of all, arranging who is using whose equipment at a show.  (OMG!)  I don’t mind being the contact person for my band because I realize that it’s easier to talk to one person than three.  But how does, “Bring your cymbals, hardware, snare, and pedals,” translate to showing up with just your cymbals… Or your entire drumset?   I think the best one, though, was when a band who booked us for a particular show asked me if they could use Pink Missile’s equipment because they were going to leave before we played and didn’t feel like bringing all their stuff.  Uh….

Still, there are a lot of things I will miss, like playing this song:

I’d say that I’ll miss adventures with Danny and Jim, but there’s no reason we can’t go adventuring during Hiatus — in between all the library homework, of course.  There’s also the fun of getting unexpectedly drunk at weeknight practices, but I guess I can get wasted on weeknights without an official reason.

What I’ll really miss, though, is hearing the music my bands make and enjoying the camaraderie that goes with that process.  It’s hard to describe the feeling of playing a song when everyone is right in the pocket; it’s like group meditation, creating a bond with people you might not otherwise know well and strengthening the bond with those you do.  I’ve met my husband and some of my closest friends through playing music, and run into many more talented folks along the way.

Speaking of talented folks… If you wanted to see me on bass duties with The Shoutbacks, you missed your chance about two months ago – but hopefully those guys will be at Seaside Tavern soon with their new, hairier bassist.  (They’ve also been playing other shows all over the state.  Like The Shoutbacks on Facebook to stay in the loop, because they kick ass!)

I’m not sure what the theme of the next movement will be — but to all my friends who pretend to care because you love me, you’ll find out at some point.  Thank you for waiting with bated breath.  😉