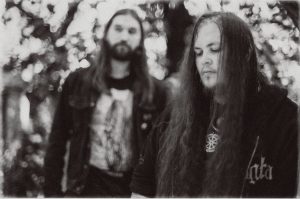 Austrian post black metal band Harakiri for the Sky releases their fourth album, Arson, today!  Thanks to the marvels of modern technology, Alternative Control was able to chat with vocalist JJ about what’s going on with the band.

What does your band’s name mean?

The name was my idea. To me this name should describe a special feeling I get while listening to music. It’s like running straight up to a cliff and just jumping into the sky, like in the music video of Sigur Ros’ Glósóli — but it’s also leant on a song by the Norwegian band Snöras.

[Editor’s note: I still had to Google “harakiri.”  Ya learn something new every day…]

Arson is your fourth release.  How do you feel your music has changed or developed since your self-titled debut in 2012?

With Arson we kind of matured. The music is more conceived and thought-out, lyrically as well as musically. In comparison to our first three records, Arson is for sure the most eclectic one with very different musical influences. Also concerning to the production, we made a big step. Now we sound like we always wanted to and made the best album we were able to at this point of life.

What is the story behind the song “You are the Scars” — is it a general commentary, or inspired by a particular relationship?

I think so yeah. But I tried to write the lyrics very generally so also other people can identify with it. So it’s both.

The video for “Heroin Waltz” is striking, and I’d say the lyric video for “You Are the Scars” is among the most memorable lyric videos I’ve seen.  How do you come up with ideas for imagery in your music videos?

We have something like a “Video Guy” who made all our videos in the past. He comes up with all ideas and we discus it all together after words. He is the creative head behind all our videos. We are just musicians, so we don’t know much about these things.

[Editor’s Note: These videos were directed by Andreas J. Borsodi.]

Austria’s music scene is very small and manageable. We have a few very good bands like ELLENDE, SCHATTENLICHT, GATES OF SLEEP or the Dark Ambient Project SOAP & SKIN and stuff. I don’t know much about the Black Metal Scene. Most of my friends play in Hardcore or Shoegaze Bands such as FLORALANE or SPIRIT DESIRE We also had a great Indie Band called STEAMING SATELLITES, but since they turned their focus on 4-Chord Radio Pop I lost touch with them. My girlfriend plays in a great Dark Psychedelic Rock Band called LES LEKIN. But that’s it I’d say.

United States folks, pick up your copy of Arson here — and as usual, find the band on Facebook for updates, tour dates, and maybe even romantic, brooding dinner dates!