Anthony Quinn Carpanzano, better known simply as “Quinn,” has been a fixture in the Stamford music scene for decades.  Quinn stands out in a sea of self-interested local musicians as someone who has altruistically dedicated himself to making The Scene thrive.  In addition to playing in his own original bands and as a solo artist, he hosted an open mic at the now-defunct Fez for years and has helped his long-time friends in Liege Lord organize travel for multiple European performances.  At any local show, no matter the venue, the pom-pom on Quinn’s winter hat can be spotted bobbing through the audience at some point in the night.

But venues for original music in Stamford have been a changing landscape recently, forcing people to get creative.  For the past several months, Quinn has been working on what I’ll call a “Riot” concert series, which started over the summer in a downtown Stamford  office.  This fall, the series has moved to a new location: Amadeus Piano at 46 Magee Ave.  Now known as “Riot At Amadeus,” Quinn transforms the piano retailer’s performance space into an “underground Rock Klub and Euro-style discotheque” for one whimsical night each month.  With the help of sound engineer Pete Caris (“Bud Z” to the initiated), he will be hosting Sidepiece, Jacques Le Coque, and Althea there on Saturday, February 17th. 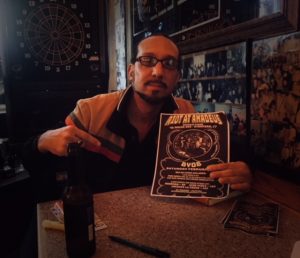 When I walked into Burns on Tuesday night to do this interview, Quinn was coloring DIY handbills for the 2/17 show with a highlighter.  Meeting me in the short time he had between regular adult responsibilities and a 9pm band practice, he wasn’t content just to relax with a cold one — every spare second was put into music and making The Scene grow.  Full of enthusiasm, he launched into a description of Amadeus’s unique atmosphere before I could even turn on my recorder.  Our conversation below has been edited for length and clarity.

…The other side is really cool — he took out that middle piece that held the racks, and that’s gone.  It’s a big open space.  It’s much better than I expected it to be.

Okay we’re gonna have to go back to the beginning at some point, but why is the owner of Amadeus willing to open his space to you?

Yury’s having fun, he’s a musician and he wants to have fun.  […]  It goes back to Richard Corsello, the engineer I work with.  [Editor’s note: Corsello is a Grammy-winning engineer who is known for his work with Sonny Rollins and Bill Evans.]  Remember The 9th Note?  So I was doing some work with Richie there doing some jazz bands.  After that closed, Richie was looking to do something with Yury because Yury does jazz shows and classical shows, still — I caught wind of it ‘cuz I was doing shows at my office.  I met with Yuri and I was like, “This is what I’m doing, come to the show.”  And he came, and he loved it.  The ice cream sandwich thing, he was like “This is amazing.”  I was like, “All right, let’s do something at your place.”  And he’s like, “Let’s do it.”

He’s a great guy, he’s open to a lot of different ideas and he’s changing that whole place around.  There’s gonna be a vinyl shop near the front entrance […]  We’re still gonna use the main room for like Hoseman, for opening the night — and I’m gonna have the three other bands setting up in the back, ready to rock.  We got a new light system that Pete (Caris) brought in.  He’s there right now, working around the clock to get this thing up and running.

It’s all about trial and error — it’s a work in progress and I think I’m getting some good feedback.

Fine tuning along the way, things like the sound… And now we have free beer from 8pm-9pm.  Y’know, the pizza I tried, but no one cares about pizza.  But check it out, we’re gonna have a food truck, a taco truck.  Y’know that room where we played in?  We’re gonna have the truck pull in there because that room opens up, just pull in there and sell tacos all night.

Like I said, it’s a work in progress.  By the summer, hopefully we’re gonna have (the show) weekly — get a good rotation, get touring bands from here and there.

You had a touring band from California in there a couple months ago, right?

Yeah, Robbery Inc.  The guitar player was in that band called Trapt from the 2000s.  […]  We did the show on a Thursday night because it was the only tour date they had open.  […]

The hospitality that we’re gonna give the bands that play in there — there’s gonna be food, beer for them and whatever else we can possibly give them.  I’ve been on the road with Liege Lord and I’ve seen the hospitality they get in Germany and Greece, and it’s top notch.  It’s about honor and respect, and that’s how these bands should be treated too.  Unless they’re assholes [laughs] — then it’s like, “Fuck these guys.”

Speaking of Liege Lord…  For our readers who don’t know you personally, tell us about your history in the music scene locally, and internationally.

I’ve lived across the seas, I’ve played across the seas… Shoot, I don’t even know where to begin.  I just been writing music since I was sixteen, seventeen years old.  […]  I don’t know, I’m here right now.

What’s Hoseman, is it just you?

Yeah, it’s just me with an ol’ school Radio Shack keyboard that I use the drum beats on, and press a note — like if it’s a three chord song, if it’s in Eb I just hold down the Eb and have a drum machine going, then play guitar and sing.  Some of the songs are ones I do with my live band — I’m not gonna say the name right now because we’re in the midst of changing it.

Terry the Taster….  [laughs]  Where was I?  […]  The whole Hoseman show is pretty much experimental.  […]  It’s coming from my Radiohead influence, or Euro-trash stuff from Amsterdam, techno, dance stuff, that I got introduced to out there.

Is it nerve-wracking to get up there by yourself?

No, I love it!  I mean, it’s very confusing — you saw me up there before, right?  I don’t have anything set, I just press play and go.  Playing live is the best thing, you’re just thrown into the fire and it’s a great experience from start to finish.  Believe me, I do get nervous though before I play, every time.  It’s great to be nervous.  I don’t know why, I’ve been doing it for a long time, but…

So the upcoming show — you’ve got Althea, Jacques Le Coque…

Althea’s from New Haven, they’re psyched, they like to eat pizza…  […]  And yeah, Jacques Le Coque’s been in Stamford for eight or nine years.  One of their first shows was with us, with Mantyhose down at the Bungalow in like 2009.  That was one of their debut performances — I think you guys played too, Pink Missile!

We did?  I don’t remember that…

Yeah, you played!  It was that 80s show at the Bungalow…  Danny was in the band…  I was with Franco and Chris at the time.

Sidepiece is new to the scene.

Yeah, they’re tight!  They remind me of old school stuff — a little Rage Against the Machine, hardcore attitude…  I think they’re definitely gonna impress some people.

So aside from you continuing this concert series that you’d started last summer, it’s been a bad couple months in the Stamford music scene with Seaside and The Fez closing…

There’s nothing really around for a city this size.  You drive down 95 and you look, and if you’ve never been to Stamford, you’d be like, “Wow, that’s a big city.”  And you’d think a city like us would have a thriving original music scene, but it fucking doesn’t.  And guess what — it now does.

Well, you’re keeping it alive, Quinn.  That quote’s going in.

Whatever quotes you want…

We’re gonna do a day fest too.  Six or seven bands, get some sponsorships…  We’ve heard about these places, these underground kinda joints in LA, Brooklyn, even New Haven… And now it’s here.  And I’m gonna have touring bands.  We’re building towards (big things).  Like I said, it’s a work in progress but the work is fun and rewarding.  I’m not gonna make a million dollars off of it, I just want good music here in Stamford.

Speaking of dollars, how’s the price tag working out?  The admission?

The twenty dollars?  There’s been a little resistance, but once I explain the costs involved in hosting the show…

If you’re a drinker, the BYOB policy balances it out.

And I mean if you come for a full night, from 7:30 to midnight or whatever, there’s a dance party after…  DJ 4skinzz from Bangkok…  He’s an international star!  [laughs]  Can I grab a beer?

[Quinn returns with a beer.]  Okay, more gibberish from Quinn.  […]  But yeah, for twenty dollars you get a keg of beer, an ice cream sandwich… You get an event.  Hopefully it will be a place for all the freaks, geeks, posers, and whatever…  To hang out.  […]  (The situation with venues closing) forced me to think outside the box.  We have all the tools here — we have the facilities, we have the bands.  […]  I want to make a safe haven, like I said, for us freaks and geeks.

Weirdos of Stamford, consider yourself invited.  Hoseman will be opening up for Althea, Sidepiece, and Jacques Le Coque at Amadeus on 2/17/18; the bands will be followed by a dance party in a night that is sure to be out of the ordinary.  Get there early for the free beer and stay late for the ice cream sandwiches! 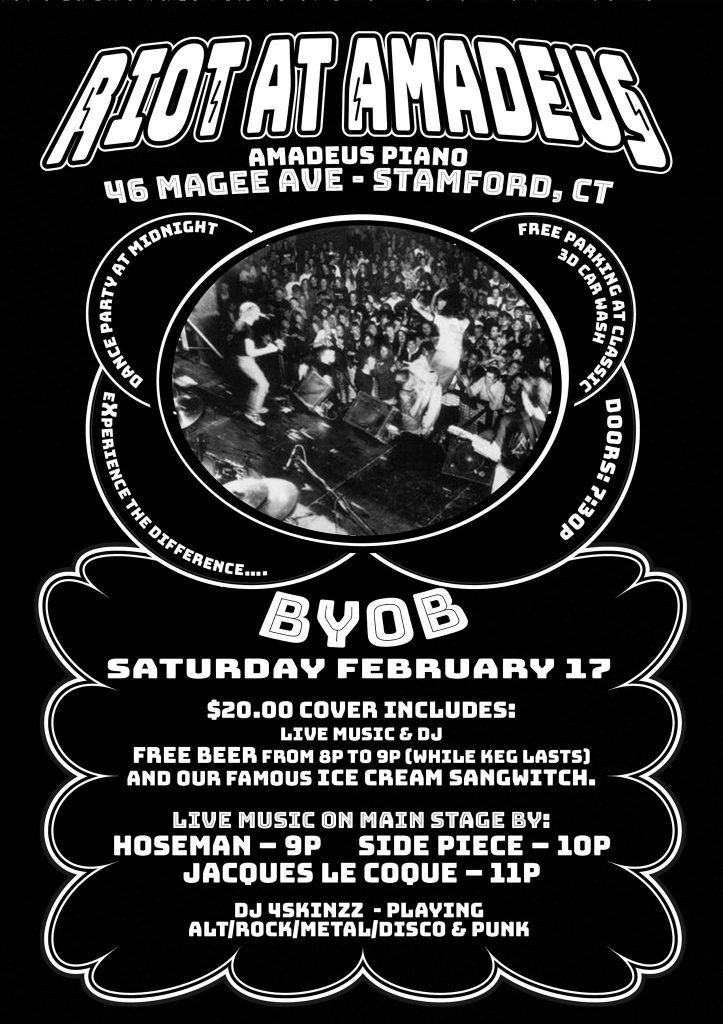