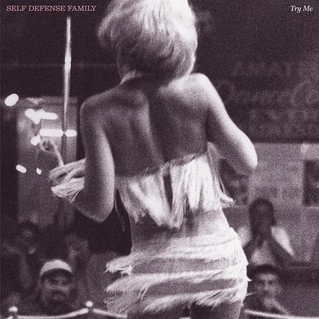 Self Defense Family is the type of post-hardcore band that is constantly pushing boundaries, whether it be lyrically or through their music, which seems to change from release to release. They make you reconsider what constitutes punk rock or hardcore. In addition, they have a shifting line-up of musicians that can see the band swell up to ten members or down to three depending on their mood.

Lead singer/lyricist/band major domo Patrick Kindlon (who also fronts Drug Church), has guided the band through some very interesting directions, and has even upset a few people in the scene with his views on various subjects and lyrical outlooks on life. Regardless, of what you may think of him, he is a compelling figure and compelling front person, who is known to work himself into a froth during shows, and drop some of the most hilarious between song banter you are likely to hear.

With a show at the Crunch House in New Haven on January 16 imminent, we decided to send Kindlon some questions on a variety of subjects and here are his answers. You don’t want to miss this show.

What is your creative modus operandi for Self Defense Family? How does it differ from Drug Church?

I put trust in my band mates for both, and my approach of listening to a song a couple times and writing the lyrics in the studio applies to both. But there’s a definite difference in content. I don’t know exactly where that comes from, aside from the music itself. Some shit makes me want to get spiritual, other shit makes me want to get petty. It’s not something I intentionally think about, but after I listen to the songs I realize the lyrics for one band could never be used for the other.

In Self Defense Family, you tend to change up the sound from song to song, is that on purpose or is it just how the songs turn out? Is there anything you won’t do song wise in this band? Or are you open to anything?

Nothing is intentional with Self Defense. We’ll try to have some intent going into something, but quickly relearn that we can only do what comes naturally. Whatever comes out is what we use. But, no, there’s nothing we wouldn’t do. If we sat down tomorrow to record and a ska record came out, we’d release a ska record. Because it would be an accurate representation of where we were at mentally when we recorded. And that’s all we do, really. We’re releasing a bunch of midi recorded material this year. And at least one record people are gonna call ‘country.’ Genre is whatever.

What were you trying to accomplish with the new album Try Me? Do you think you accomplished what you set out to do?

The idea, loosely, was to use a specific person’s life as the inspiration to the record’s mood. And one thing the record has in spades is ‘mood.’ So, I guess we accomplished it. Feel good.

What were the reasons for including two spoken word pieces (“Angelique One” and “Angelique Two”) on the new album? Does this fit into the band’s anything goes way of being creative?

We’re devoted to the idea that anything we put on a record is ‘music’ just like anything we do on stage is a ‘performance.’ It may not be what the listenership or audience expects or wants, but if it’s what we were into at that moment, it’s what we’re gonna do. We were pulling a lot of the vibe of the record from Angelique’s life, so putting her voice on the record in the form of an interview seemed natural.

Where do you draw inspiration for your lyrics? Why?

Typically other people’s lives act as the focus for revealing things about my life. I’ll read about or firsthand witness someone behaving in a way I see myself behaving. Then I’ll write about them in an effort to write about myself. I couldn’t say exactly why I do it like that.

What is the reason behind the shifting line-ups? Does bringing in different people help to keep it fresh?

100%, yes. Playing with a number of people in many variations makes music a real joy. Some combinations work better than others, but all are an experience. And that’s sort of the point of music, I thought.

The band is also known for having as many 10 members at a time or as few as three. What is the reason behind having a fluctuating line-up? Is there some things 10 people can do sonically, that three can’t, and vice versa?

Also, how many people will you be touring with? Is there an ideal size to the band?

Midwest, we toured as a five piece. I think we’re doing most of the east coast shows as a six-piece, and west coast we’re doing as six or seven, I’m not sure. We’ve got a number of multi-instrumentalists that can fit into whatever role is needed and everyone is talented on the level where they can adapt to whatever configuration we find ourselves in on any given night. We’ll play with two drummers from time to time, and three guitars is common. Two vocalists, etc. If all ten or twelve members said they wanted to go on a tour, we’d make it work.

What are the future plans for the band? More touring? More recordings?

I’d like to tour only in support of LPs. Otherwise, I think our time is better spent in the studio. Releasing eight records a year is, creatively, much more fulfilling than touring. I think eight is the number we’re on-track for in 2014, but things shift a great deal. Could be 10, could be five. We’ll see how it shakes out. As long as we’re making things, I’m a happy individual.

Self Defense Family will be performing at Crunch House this Thursday, 1/16 alongside Canvas and Blessed State.