Over a decade into the new millennium, there are few young bands that embody the sweaty, beer-soaked essence of old rock and roll – and one of those bands is Barn Burner.  If Phil Lynott was born twenty-five years ago in Canada, this might be the band he started.  Barn Burner is kicking off a tour with Skeletonwitch today, and Alternative Control had the opportunity to interview singer and guitarist Kevin Keegan via email earlier this week.  Here’s what he had to say about the band’s music and plans for the future…

AltCtrl: Can you give me a brief history of the band?

Kevin: We started in 2007 as a bunch of jokers wanting to play house parties and brew our own beer. Things got a bit more serious when we realized we had some decent songs written and a further desire to tour and record.

Kevin: I generally write a rough arrangement and bring it to the band where we tweak things and figure out what’s best for the tune.

AltCtrl: What would you say are the main differences between your two albums, Bangers and Bangers II?

Kevin: The big difference is probably that the second record is quite a bit darker, in sound and lyrical content. I’d like to think the quality of the song writing is more refined from the first, too.

AltCtrl: Who or what are the musical and non-musical inspirations for your songs?

Kevin: Early heavy metal for the most part, musically. Non-musically perhaps God and the devil, in a very fictional way.

AltCtrl: What are your thoughts on the music industry today? (i.e. CDs vs. mp3s vs. vinyl, illegal downloading…)

Kevin: I think bands that exist now are unfortunate to be active in an age where making a living from playing music is no longer a viable option, except in fewer and fewer cases. The only thing you can do is embrace what has happened to the availability of music and come to terms with the fact that however people get your music, as long as they want and can get it, that is a pretty rewarding thing in itself.

AltCtrl: What’s the weirdest or most “unexpected” music in your collection?

Kevin: I have a Coheed and Cambria album on my ipod that was a pretty guilty pleasure at one point in my life, don’t tell anyone!

AltCtrl: What’s it like being on tour with Skeletonwitch?

Kevin: I’ll tell you when the tour actually starts (on Friday)!

AltCtrl: Any good, bad, or ugly tour stories from past tours?

Kevin: Tours have been pretty tame these days. We had some harrowing experiences in Europe in the fall. Totaled a van, lost the keys a few times, our tour manager got arrested… You know, the usual.

AltCtrl: How did Barn Burner get from the metaphorical garage to being on a national and international tours?

Kevin: We just (tried) to play out of town as much as possible, and soon more and more opportunities popped up. 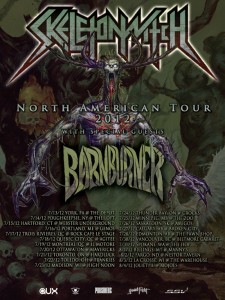 AltCtrl: What’s the metal scene like in Montreal, or Canada overall?

Kevin: It’s pretty close knit. We know most of the Canadian metal bands pretty well and kind of share a lot of influences. It’s a huge country geographically but there aren’t a lot of us, so we tend to get cozy.

AltCtrl: What can fans expect from Barn Burner in the next couple years?

Kevin: A new record and some more touring hopefully!

And that’s a wrap! Make sure to check out Barn Burner’s tunes — your friends at Alternative Control think you’ll agree that they kick ass.  We’ll let you know how the live show is after we get home Sunday night!