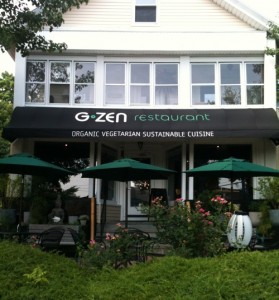 G-Zen, located smack dab in the middle of Branford’s retail/restaurant section may possibly the best vegetarian/vegan/raw vegan restaurant in the state.

That’s a lofty amount of praise, so allow me to go further and defend my statement. G-Zen is able to craft delicious and challenging  dishes that can change the minds of carnivores and confirm the lifestyle choices of vegans and vegetarians alike. The food is fresh, tasty, well-spiced (when needed), adventurous and well crafted by owners and chefs Mark Shadle (formerly part-owner of “It’s Only Natural” in Middletown) and Ami Beach Shadle (a nutritionist and raw food specialist).

Opening in October, 2011 G-Zen (the “G” stands for a “green and sustainable movement that looks to expose as many people as possible to the cuisine,” according to Ami Shadle) consists of the restaurant in Branford and a food truck that goes by the name of the “Gmonkey Mobile” that runs on biodiesel fuel that sells organic, vegan food to Hartford, Middlesex and New Haven counties. Some of the produce for both the restaurant and the truck comes from the Shadle’s solar powered farm in Durham so by visiting the establishment you are getting high quality ingredients that go almost from the ground right onto the plate. 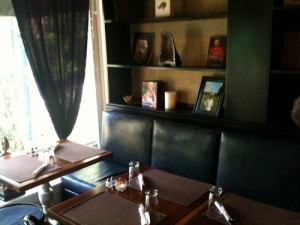 Now for the good parts. The restaurant looks great from the outside, with greenery, flowers and plants enveloping both the entrance and the three outside dining tables. Upon entering the place you immediately notice the various Mandalas hanging off the wall (the Mandalas are considered sacred pieces of art in the Hindu and Buddhist communities) along with other books, knick-knacks and pieces that give the place a cultured and classy feel. The room looks like a place you’d take someone if you wanted to impress them with both your cultural lean and your taste in cuisine. Sitting by one of the windows can get you great view of Branford’s Main Street area on either side, as the restaurant is wedged in between two one-way streets heading towards City Hall.

Saying that G-Zen is fully sustainable is not a simple description. Almost everything in the room, from the tables (reclaimed wood) to even the bathroom (vintage, reclaimed porcelain) are products of an ideal that wishes to leave as little of a carbon footprint as possible.

Now, onto the food. In a previous outing, my party and I were positively overwhelmed with various items on the menu from the Zen Burger, a black bean and chipotle mix that tastes fresh and alive and defeats most vegetarian burgers and even competes with most beef burgers, to the Spinach and Potato Pierogi, which sits atop a bed of greens with apple butter and tofu sour creme to more adventurous choices like the Thimble Island “Crab” Cakes, which replace the crab with tempeh, seasoned just right to taste like the freshest “crab” you can find. For the most part the food is so fresh and tasty that you end up thinking more of how non-greasy, non-heavy and natural the food is without hitting up a burger joint on the trip home.

I’m taking this from a non-vegan perspective, so I figured I would ask around and see what the opinions were from folks who actively participate in a non meat/dairy/poultry/seafood diet. The responses were mostly positive, with heavy emphasis on the creativity of ingredients and preparation of the food. The only real negative I received was of the more upscale price for the menu items. The average price scale for the menu ranges from $7 to $14 for appetizers, soups and salads and $14 to $22 for burgers and entrees. There are other places that do this for a cheaper price, but the quality, scene, and overall experience makes the few extra dollars worth it, and if you are a vegan/vegetarian, G-Zen is a must visit when looking for a place that suits your needs.

My second outing I was introduced to the smoothies (I had the Orange Manadla, which included organic oranges, coconut water, frozen bananas and vanilla coconut ice cream), the Mayan Sun (sweet potato enchiladas wrapped in an organic corn tortilla with mole, rojo cheese, beans, organic brown rice, salsa and tofu sour cream) and one of the more interesting and tasty items, the raw food taco, which is the one item I request that anyone who shows up to G-Zen should try to be amazed at how raw food can be organized to make one of the most interesting and best tacos I’ve had. There are also desserts – the Chocolate and Hazelnut Cake is extremely rich, decadent and “gourmet” and it’s made in house using no processed sugar, milk or eggs.

As a whole, G-Zen is entirely worth it for vegans and non-vegans alike. It’s very well prepared, healthy food that tastes as good as it looks on the plate. For vegetarians and vegans, its high-quality food in a setting that differs from a lot of places doing the same thing and for non vegans you get a real treat by just sampling the idea of a different take or option with the food. It may not convert anyone to the lifestyle, but you absolutely get a great, healthy meal by visiting the establishment. As Shadle sums it up, “The most gratifying thing is to touch people who normally wouldn’t come in here and when they come they are so blown away that they could conceive it possible to eat this way after eating here.”