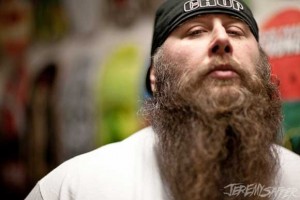 Jessie talked with New England Metal and Hardcore Festival organizer Scott Lee in late February.  In the time that’s passed, many “Battle for Metal Fests” have taken place; trucks were stolen, mistakes were made, and petitions were signed.  Now the 70-band behemoth, pun intended, is upon us in less than two weeks.  Here is what Scott had to say about the sixteenth Metal and Hardcore Fest.

Jessie: My name’s Jessica, I’m calling from a blog in Connecticut, and thanks for doing the interview with us.  Can you tell me a little bit about how the festival has grown over the years?

…And it’s true underground metal – if Metallica came by and said “Hey, we wanna play the festival,” we’d be like, “Eh, you have to play Master of Puppets and back, you can’t play anything after Master of Puppets.”  […]  But we’ve had Megadeth, Lamb of God, Killswitch Engage […] every hardcore band that’s ever come out that’s big as well – we’ve had ‘em all.

[…] One year on the upstairs stage, the small stage, we had Meshuggah headlining – and Lamb of God played once on the main stage in the afternoon, and they’ve headlined it twice.  Same with Killswitch – we’ve watched these bands grow and we feel like we’re part of it.  We know that we are.

J: Okay, cool.  I’ve got a couple questions from some of my other writers.  One of them wants to know what your ideas are about keeping a balance between hardcore and heavy metal acts.  Like, if you feel like you need to keep a balance between those, or if you’re like “Fuck it, it’s all extreme music, let’s do whatever.”

S: I keep a balance – both genres are very important… and personally important to me.  Basically trying to keep everybody happy – including your writers! – it definitely is a task.  […]  We try to keep a good balance, y’know?  We’ve got metal, hardcore, death metal, deathcore, punk, post-hardcore, pre-hardcore, whatever you call it.  We just try to keep a good balance of everything.  It’s kind of an art form.

J: There are always people complaining.  There’s always people like, “Why is this band on there?” and this and that…  What would you say to that?

S: I’d say that you can find at least two or three bands that you do like, and just come to the fest and have a good time.  People are complaining about this, that, and the other thing, and it’s gonna happen.  […]  I want everybody to be happy, but you’re never gonna make everybody happy.  Is that a good answer for that question?

J: Yes, it is – it’s a nicer answer than I was expecting, but it’s a good answer.

J: What’s your goal with booking local acts?  What’s their role in the festival, with all the “battles” and this-and-that?

S: We do a thing every year, it’s something called Break-Thru Music.  […]  I don’t like calling it a “battle of the bands” because in the end it isn’t.  Basically what we do is we have three winners and (one of them plays) the main stage each day.  If there’s a local band that does really, really well – like, we have Julius Seizure playing on the Thursday of Metalfest, and they’re a local band from (New Jersey) – and y’know, just up and coming things.  There’s are bands that are playing the festival, there’s a band called Barrier and they’re a band that has no label and is just an up and coming band that has a lot of hype and stuff like that.  That’s how that comes about.  If there’s a local band that’s doing really well, we’ll out them on the Fest.  […]  Is it a contest?  Yeah, it’s a contest.  But is it something that you can generate more situations and gain more advertising from all the Metalfest marketing and everything?  Yeah, it is.

J: All right, well I got another question from one of our writers.  He wants to know how you look at something like Maryland Deathfest.  Do you view them as competition to book hard-to-get bands, or not really?

S: Nah, I think they’re great, I love them – Deathfest is awesome.  If I wasn’t so busy, I’d probably go to it every year.  They do an incredible job, they’re good people, and they work very hard at it.  They bring in bands that I wouldn’t bring in – it’s two different types of festivals, y’know what I mean?  We pull mixed genres of different extreme music between metal, death metal, and everything – but they do a killer job with everything that’s underground.  There’s no festival that’s competition, y’know what I mean?  They don’t look at me as competition, I don’t look at them as competition…   There’s a good handful of festivals around this country that do a really good job.  Hardcore Fest in Philly, Joe does a great job with that.  Rainfest in Seattle, they do a good job.  There’s just so many different types of festivals that go on throughout the country, it’s impossible to go to all of them.  I don’t look at them as competition and I hope they don’t look at us as competition.

J: Okay, do you have favorite past lineups of your festival?

S: Man, that’s one of the questions that I don’t really… Uh…  The first year was pretty cool and last year was pretty cool, and everything else is kind of a blur!  There’s special performances, like Jesse’s first show back with Killswitch Engage, there’s always different types of things like, y’know, Lamb of God…  There’s not really a special year to me, but more or less I think […]there’s some good things about every festival.

S: No problem – thank you so much, I appreciate it.

To hear the interview for yourself, listen on our Soundcloud page — and start this track at 2:30!  Audio editing is a duty of our yet-to-be-hired intern…