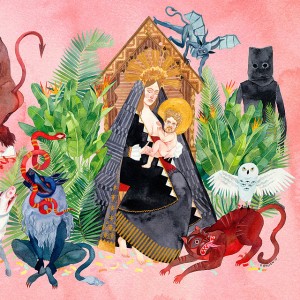 Fleet Foxes is one of the best American bands around right now. I really believe that to be true. With the gentleness of Nick Drake, rustic anthems of Crosby, Stills and Nash and the quiet reverence of Simon & Garfunkel combined, Fleet Foxes is a folk rock utopia. I’m talking about music that paints pictures of bird-infested trees, toasty fires in snowed-in cabins and bright sunshine cascading across stone-wall ruins of old farming land. Their sound is amazingly evocative, with soaring vocal harmonies over minstrel ballads and acoustic rock carols supporting within me a deep sense of well-being and nostalgia for the countryside I remember from visits with the family in Maine.

So I was surprised that Father John Misty’s debut album Fear Fun almost trumped those two Fleet Foxes releases as my favorite folk rock album. The ex-Fleet Foxes drummer Josh Tillman had made a markedly different sounding release, focusing more on psychedelic jolliness and lyrical hilarity. The melodies were sweet, the song structures were stripped down and the subject matter was very tongue-and-cheek. I actually found myself laughing out loud at some of the phrases. And though the music lost most of the pastoral sensibilities of his former band, he made up for that with infectious melody and the sly wit of a beatnik poet. This brings us to his most recent effort, I Love You, Honeybear.

One thing that’s immediately evident is the ridiculousness of his lyrics. His sense of humor has hit new levels. And if you focus your enjoyment of this release solely on the entertainment of his words, this would be a 10/10 easy. Not only is he funny, but equally endearing. Josh sings (beautifully I might add) about the blunders and blessings in his life, most notably events that revolve around his relationship with his wife Emma. His stories are like listening to a stand-up comedian try and have an emotional moment with a friend, yet unable to consciously ignore the comedy of unfortunate events in his life. There are plenty of lyrical moments that will make you smile, and a few that forced me to burst into laughter. It’s quite a feat to write with such comedic mastery and not come off as a parody.

As for the music, I can’t ignore my disappointment. Despite the overall richness and symphonic sugar of these songs, the melodies and choruses fall flat. Whenever Josh wanders into a memorable vocal harmony or a bobbing groove, he loses direction and transitions into awkward key changes that crumble any chance of connecting with these songs in the right way. If Josh felt the need to create a pretty acoustic pop album that moves a bit sluggishly, he needs to focus on more than just the absurdity of his lyrics. And to be honest, the lyrics are the only thing that bears any kind of uniqueness here. I understand if he feels the music needs only to back up the words, but that doesn’t mean instrumentality shouldn’t be engaging.

Perhaps I’m being harsh considering my love for his debut album, but I’m just wondering what happened to Josh Tillman’s talent for writing great hooks. There are exceptions though. The songs “Strange Encounter,” “When You’re Smiling and Astride Me” and “Holy Shit” are highlights because they deliver on what this album strives to be: an artsy singer/songwriter pop record of Broadway comedy drama. If a greater emphasis was put on user-friendliness, this could have been amazing. But I guess Josh Tillman uses the pseudonym Uncle John Misty now as an opportunity to tell a few jokes about his marriage and promote the sharpness of his wit. O and yeah, let’s hire a band to play some Elton John filler songs in the background.

Due to lyrical strengths, amazing singing and gorgeous sound production, I’ll bump this up to 6 out of 10.