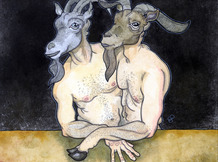 Si Ombrellone’s Horns On The Same Goat has finally surfaced after being initially completed ten years ago. For whatever reason, band leader/producer Simon Tuozzoli was stalled in putting the finishing touches on it, but I’m glad he was finally able to present us with what I think as one of the most thoughtful and fun records of the year.

This music is pretty easy to listen to. Horns straddles the line between Lynyrd Skynyrd smokiness and Sub Pop Seattle grunge. The songs are short and approachable with a certain rustic gloss that keeps things from getting too pretty in the album’s lighter moments. But then again, the album doesn’t become too heavy when things get tense. Simon’s guitar tone and melodic sensibilities water down the acid in faster, punkier sections.

But this doesn’t sound like safe music. Simon took his time to formulate fourteen rock tracks that uniformly tackle the psychological struggles that govern human behavior. One-word titles such as “Rage,” “Change” and “Love” introduce the basic concepts that govern everyday life decisions, epiphanies, and regrets. And the music in each track reflects the positive and negative connotations of each title. “Beauty” is awash with a ballad haze iced with a bit of bitterness. “Joy” is a punk jubilee scarred by sarcasm and anger. “Forgiveness” is swampy stoner rock infused with sober spirituality. Inside every song’s thematic foundation lies a contradictory curveball. And that’s why this album is deceptively simple. The execution is easy and welcoming, but the concept is a labyrinth of emotional paradox.

The recording is crisp and warm, adding to the earthiness of a sound that would find a comfortable home in the 70s rock arena. Simon did a hell of a job as the man at the helm of the mothership and almost all its instruments. He also proves his expertise at the microphone. His voice soars at certain times, and yet still retains that gruff edge necessary for expressing the sourness of his lyrics. Drummer Frank Picarazzi is stellar at laying down the pace, adding touches of flare when needed. The both of them have a great energy together, and I only hope that they find a way to take this music out on the road.

All in all, Horns On The Same Goat is one of the best things I’ve heard so far this year and stands a pretty good chance on making it to a best-of list this December. Any fan of rock, alternative music and even metal could find something to like here. So do yourselves a favor and order one for yourselves. It’s the kind of record that goes great on a night drive, and sounds even better when you arrive home, turn the key back and play it through before stumbling through your front door.

Download your copy of Horns on the Same Goat from CDbaby here.