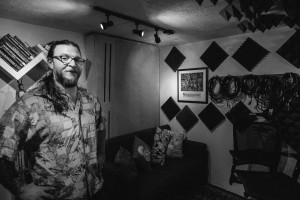 I first came across Simon Tuozzoli’s work through my friend Rob’s project The Danbury Lie.  Rob sent the first album to Alternative Control for review — an unusual collection of songs, with sparkling recording quality and a few really ear-catching basslines.

“Who played bass on this?” I asked him.

Fast forward a couple years:  Tuozzoli mastered AltCtrl’s 2013 comp album.  He’s recorded my own band’s first EP and is scheduled to record the second one.  I’ve also become quite a fangirl of his occult metal band, Vestal Claret.  So when a reader suggested interviewing Tuozzoli as his Seymour studio, UP Recording, nears ten years in business, I was more than happy to oblige…

I know my own answer to this question, but in your opinion what has been bringing local musicians to UP Recording for the past ten years?

I think the people who choose me to work with them on their recordings want to have their recording be unique and original.  We are all unique in style and technique and what I stand for is the preservation of that.  I am one of those engineers who is reluctant to use a computer to alter a musicians performance, to correct it or augment it.

What should bands know or think about before they come in to record — in general and specifically with you?

Know your songs back and forth.  Demo them and listen to them as a listener.   If they don’t make you proud or excited, re-work or toss them.  Talk about your expectations (if you have any) before you start recording with someone.  Specifically with me, don’t offer me a beer until it’s Miller Time.

How do you deal with a band that’s unprepared, or a musician who starts getting anxious and fucking up?

I’ve never been in a situation where every member of a band is totally unprepared. Although in that situation, I would send them home and reschedule.  If one particular musician is unprepared or having a tough time, I either turn on the heat, or give them a break. Some folks can work well under pressure, some need a breather and a boost. You have to decide how to help them along.

What advice would you have for someone who wants to set up their own at-home recording studio?

Have at it and do your best.  If you produce something that you are not completely proud of, don’t play it for anyone. First impressions are important.  Time is money and if you have the time to learn the art of recording,  you will save money and do things exactly how you want.   If you run into any snags during any part of your production, there are many engineers out there that can help you along.

Working from home in a non-traditional occupation, how do you balance work and family life?

I don’t and it’s not easy. I should be getting my kids ready for bed right now and I’m typing out these answers.  Most would make a schedule and keep to it.  I do set days aside where I don’t work. It’s hard to resist though. Making music is the best.

What are some of the challenges of running your own business?  Have you ever thought of throwing in the towel?

Making a profit is a challenge.  All good music makers have the gear itch.  Getting new people in to work with is a challenge.  It doesn’t help that artists and musicians in Connecticut can’t really thrive.  I’ve never thought of giving up.  I’ll throw the towel in my grave right before I fall in.

On the other side of that question, what do you like about being self-employed as opposed to being a regular working schmuck?

Working for yourself is the best. No one will tell me to cut my hair or iron my tee shirt.  I can pick and choose who I work with and when.  I decide whether to hang the Conan sword in the control room or wield it on the field of battle.

Switching gears to playing music rather than recording it… What’s the latest with Vestal Claret now that it’s been a few months since your recent LP release?

It looks like we’ll be composing a follow up to The Cult of Vestal Claret. I have to get back to work in the riff cave.  We’re small beans, but the label is very supportive and has got our back. I’ll be spending more time with the riffs this go around which will lend to a bit more like our Bloodbath recording.

I write the songs, not unlike Manilow, arrange them, and send them over to Phil.  He writes the lyrics and melody and sometimes sends a demo my way.  Then we hit the slab.

Are you and Phil serial killers on the weekends?  Seriously though, you seem like a nice, regular guy — but there is some disturbing shit on The Cult of Vestal Claret.  Killing your parents and burning the house down, dead little kids, human sacrifice… Where do a couple of regular guys come up with such unsettling ideas?

Phil gets all the credit on the concepts and lyrics. He is a serious fan of underground metal and films and has a beautifully sick mind.  Some of his concepts are based on true stories.

To me as a listener, VC’s portrayal of holding women prisoner, torturing them, etc. was a lot more palatable than other bands’ portrayal of similar subject matter.  What do you think makes one band’s violent lyrics sound artistic and another band’s sound misogynistic and dumb?

We don’t take ourselves seriously.  This is creative work, like making a horror film.  This is theatrics, and although it is totally harsh, it’s not disconnected from humanity.  That probably sounds stupid but I’m not going to rewrite it.

To lighten things up a bit… You’ve played bass, guitar, and drums with various bands.  Is there one instrument that you would consider your “main” instrument?

The bass guitar is where my roots grow from.

Do you have any active projects right now aside from VC?

I play drums (for exercise) in a rock band, Monster Eats Pilot and the metal trio Murder Castle.

Is there anything I didn’t mention that you’d like Alternative Control readers to know about UP Recording?

Did I mention that I have Conan’s sword on the wall? 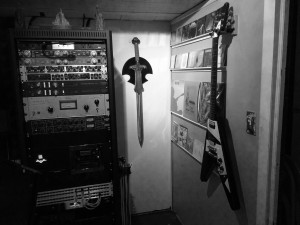 To thank the local music community for ten years in business, UP Recording is offering half-off studio time now through the end of September.  To book a date, email [email protected]!

Thanks to Christopher Baldwin for editorial input.