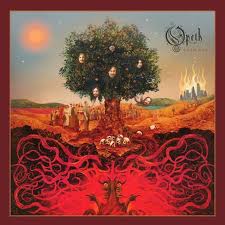 This review of Opeth’s new album Heritage was without a doubt, the most challenging article I’ve written for Alternative Control so far. To start, I’ve chosen to review an album that at my time of writing this, has only been out for a couple of weeks, and already it has split the fan base of this band completely down the middle. It seems that you’re either with it wholeheartedly, or against it vehemently, and it makes it difficult to remain neutral and objective when approaching what matters the most about this album, “the music.” On top of this, I also had to keep in mind to approach this without any bias, considering Opeth has been in my top 5 bands consistently since I first heard them about 10 years ago.

I tried to focus this review on the actual quality of the music itself. However, a note must be made on the band’s decision to abandon their sound and take this bold step into a very new direction. Most of the reviews I’ve read have been littered with praise or complaints on the fact that this album is practically completely different from their previous nine releases. I have to put myself in the praise category, standing my ground on the fact that ANY artist has the right to do what they feel is a satisfactory creative statement for THEM, and them only. If this means doing something completely out of sync of what people expect from them, then so be it. A degree of selfishness exists in the creative process of any good artist in any medium. I paraphrase another well-rounded musician named Steven Wilson when I state, if an artist sacrifices what they want to do for the enjoyment of others, then they’re no longer an artist, merely an entertainer. It’s also apparent to me that most of the problem people are having is not the music itself, but rather the logo that’s on the cover. If this came out as a Mikeal Akerfeldt solo album for example, I’m sure none of these complaints would be happening.

Having stated that, let’s get on with the music itself. I’ve listened to this a bunch of times since I first heard it. I played it through the home stereo, through my headphones, on the computer and through a really shitty ipod/radio sync in my work truck. I feel I’ve given it enough play and enough time to sink in fully. Here’s the deal, the music itself is for the most part, wonderful. It’s also a progressive rock album through and through, no doubts about it. All the essential elements of what makes great progressive rock is present here: adventurous and linear songwriting, unconventional time signatures, trippy keyboard/mellotron sounds and a warm, vintage feel to the production. The guys certainly pulled out all the stops to make this album a compelling homage to the attitude of the gloriously pretentious 1970s, a decade of music I’m seriously fond of.

Unfortunately, and I have to be honest, this is where the album looses a bit of its staying power for me. I’ve listened to all this before. All throughout the album, though it’s all done very well, I hear traces of Black Sabbath, Camel, King Crimson, Rainbow, Jethro Tull, Genesis, Comus, Iron Maiden, Pink Floyd, etc. What I don’t hear is something bringing me back to listen to this album again, and not something from the aforementioned bands. It’s like an introduction to prog rock in a little less than an hour. The exception here is “The Devil’s Orchard,” which could be one of their strongest songs to date. It’s a song that I’ve truly never heard anywhere else, and parts of “Folklore” also get a point for originality as well.

But this is only a personal problem. Many people have never heard any of this stuff, and will truly enjoy this music for what it is: a very soulful, heartfelt, strange and grandiose composition. In fact, this album could turn more people on to prog rock, a very underappreciated genre of music. I advise listeners who are accustomed to Opeth’s previous albums to approach this knowing that it isn’t necessarily going to knock you over the head with complexity and that light and shade dynamic that fans expect. Be absolutely open-minded about it. I like to use the analogy of digging up a treasure from the earth. You wipe off the dirt and here’s this strange cardboard sleeve with a picture of heads floating in a tree. You put the vinyl on a turntable and quench your curiosity as the first piano notes fill the room. I’m not sure if a lot of people are interested in buying the vinyl, but you get the point.

There’s a quick note I must make about the lyrics. Coming from a writer’s point of view, I have to admit they’re not that great. I mean, they’re not outright bad, but definitely not committal. I know Mikeal has the ability to write incredible words. Hell, My Arms, Your Hearse features some of the most poetic and inspiring words I’ve ever heard. Perhaps if he wasn’t so concerned with rhyming everything, he’d have given himself a wider palette of theme and imagery to work with. I quote the song “Folklore” when I make the example of, “Feel the pain in your brain, insane”. I’m sorry, I can’t get behind that as being thought-provoking or anything besides juvenile.

Heritage is certainly a strange beast. I definitely recommend any serious music fan to check it out; it’s so diverse that I’m sure there’s something in it for everybody. Despite my slightly negative stance on certain aspects of this album, I don’t think Opeth did a bad job. They took an incredibly brave and admirable chance and scored on it. If I hadn’t already listened to so much of this damn music already, I would be able to enjoy this more fully. Oh well, such is the downside of being a music nerd. Ciao!