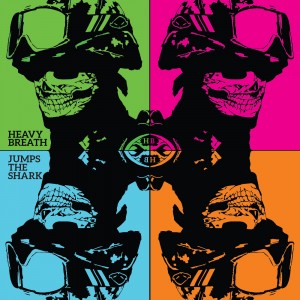 I hadn’t heard much of Hamden band Heavy Breath before I was given the task of reviewing their recent release Jumps the Shark, so I went into this as a virgin listener. To be honest, I was surprised about how much I enjoyed it. Heavy Breath could mean I was in for a boring thirty-something minutes of straight-up beat-down hardcore. And then how much should I pretend to actually like it, so that I don’t give a local act a terrible bit of press? Thankfully, this was pretty damn enjoyable for the most part.

If I had to give this a label, I’d have to call it psychedelic screamo metal. The band is a mix of Converge’s groovier moments, The Blood Brothers, Gospel and a hardcore version of The 13th Floor Elevators. Jabs of noisy riffs bend, hammer and ply whatever combination of mid-paced heaviness the band can throw at me. But strangely, they never manage to break the rigid medium tempo they’ve confined themselves to. Instead, the band infuses what could be a tiresome slab of metallic hardcore with welcome surprises that smash whatever monotony that begins to show itself in their music. These moments include super melodic transitions, industrial disturbances, bluesy guitar twang and even a jazz freakout in “Firebrand Sex”.

When it comes to the group’s core premise, they’re no slouches when it comes to constructing a heavy album. Their most imposing aspect is their mastery of the build-up of their breakdown crescendos. The jabbing guitar in the middle of “Three Weeks” manages to unfold into a devastating fight riff that tears and shreds like a madman in a hijacked slow-moving construction vehicle. Their sense of groove is also on point, and I found it hard not to sway my head along with the inhale/exhale of their wall of sound.

Speaking of breathing walls, the hallucinogenic flourishes of this album really make it for me. And their wilder musical tapestry of synths, noise and electro-beats aren’t incorporated randomly. These instruments are seminal in developing a real sense of growth. As the album progresses, electronic and industrial nuisances manage to twist and squeeze their way into the songs more and more zealously. Because of this, what starts as a no holds barred hardcore offering with street attitude turns into a weird sci-fi robot fight club about six songs in. The scope of the album’s second half is epic, refreshingly melodic and loud, loud, LOUD.

There are moments when some of the emotional screamo gets a little grating for me. For example, the clean lyrical passages in “Consume” deplete the band’s raw power and somewhat maniacal tendencies. My personal preference for this type of music is to always keep the vocals nasty, ugly and perhaps a bit inhuman. But the diversity in vocals is probably welcomed by many, so no doubt their approach is embraced by others.

I also have to give the band credit for giving me a colorful piece of cover art to enjoy. An unusual, unorthodox and psychedelic album sleeve is a quick way to gain favor from me. It’s like Appetite for Destruction meets the electronic Simon Says toy and I’m all about it.

All in all, I found this to be a strong release. The band has a knack for mixing attitude with just the right bit of zaniness to make for an interesting listening experience. I give it a strong 8 out of 10. Make sure you check out the band’s album release show at the Pulaski Club in New Britain on August the 1st!