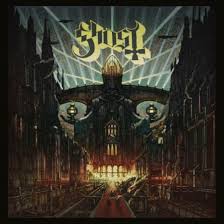 Say what you want about Ghost, but they remain one of modern music’s most unique acts. Their clerical stage presence, anonymity, campy Satanic image, and pop sensibility is something entirely new to the heavy metal genre, even if the music is a complete throwback in many ways. But when dealing with a consumer’s acceptance, it’s smart to disguise something old and safe in unique packaging, much like it’s better to mask something new in something familiar to ease any newcomer into accepting something fresh. This is a large part of Ghost’s success. Meliora continues this tradition by presenting a well-established sound in a slicker, brighter, and heavier wardrobe.

The weakness that I found in the band’s sophomore effort has been rectified here. Unlike that album, the songs don’t peter out in intensity during the second half. Meliora is a solid set of dark anthems that dull the campiness of the band while highlighting their catchiness. It only takes a couple of listens to grab onto the power ballad intensity of a song like “He Is,” and though the lyrics are shamelessly preachy and evangelically Satanic, the piece holds no cringing aspects. A bright and booming sing-along chorus sung in choral style in fact makes this a favorite for any fan of triumphant melody.

On the opposite side of a song like “He Is,” a thrashier, wickeder number like “Mummy Dust” still holds a surprising amount of old-fashioned 1980s pompousness. Anthrax riffs meet Asia’s contemporary pop and Keith Emerson synthesizer wizardry. The song is a smorgasbord of clashing styles and somehow flows together like a homogenous river of sparkling goat’s blood. And on top of this, the song has a hook that was in my head instantly. I’ve replayed it many times over.

A newfound technicality in many of these tracks manages to show off a bit of flair from the Nameless Ghouls without taking away any songwriting craft. The doomy riffs in “From the Pinnacle to the Pit” and “Cirice” have moments of complexity, but only enough of it to make the music just a bit unpredictable. Likewise, Papa Emeritus’ voice is just as pretty and saturnine, but now even more emotive and dramatic than before. The band has built just a few extra layers over a well-defined formula, but Ghost’s simplicity allows any small progression to feel like a new plateau. Don’t get me wrong, this is Ghost as we’ve always known them. But now, they’re denizens of this majestic devil church they created, rather than a collective trying to re-ignite an old school place of devil worship. This sound is no longer retro; it’s a subgenre of its own looking towards the future.

I’m glad that this third LP has ironed out the bumps that Ghost ran into with their previous full-length. With Meliora, the band is stronger than ever. I’d be willing to let just about anyone I know give a listen to this album, no matter their music genre of choice. There’s so much instant gratification for many different music fans here. If the band continues like this, I can see them becoming an entertainment sensation. Ghost on Broadway, perhaps?