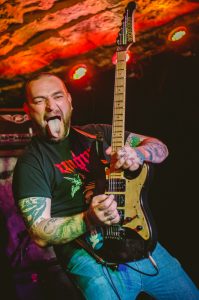 Tommy Concrete is a name that resonates within the metal and punk scene, both within his native Scotland and further afield. His resume is eclectic, from his time in legendary punks The Exploited to fronting Man of the Hour, playing with Jackal-Headed Guard of the Dead, publishing a horror novel based on extreme metal tape trading, and his own diverse solo work.  This week, Tommy takes over Nerd Talk at Alternative Control with his thoughts on classic sci-fi and dystopian works.  Read on!

This is easy. Daleks’ Invasion Earth 2150 A.D. I cannot get enough of this and have seen it more than any other film, in fact back when I was a kid I made my own fan edits of it. When I didn’t have time to watch the entire film, I made a special edition 45 minute version by using two VHS machines linked together to cut it down. I also had a special 10 minute version, which just had all the essential quotes and action moments, such as the bit when the Daleks explode a garden shed by ejaculating explosive mist at it and when the leader of the resistance spins the wheel of his wheelchair one last time before he dies.

There has been a bit of controversy over the years about this film being canon, almost always Peter Cushing is not mentioned when people list the Doctors, which is for me ridiculous as he is one of the best Doctors, second only to Tom Baker. I recently heard something that the films are now official Doctor Who canon, but they are supposed to be films about Doctor Who made in the Doctor Who universe…. does that mean Doctor Who is real?

Sci-Fi is has its fair share of crap alien soldiers. From the Imperial storm troopers’ appalling aim and toilet paper thin armor to the general utter uselessness of the original Battlestar Galactica Cyclons. Both of those alien clown armies look like the S.A.S. in comparison to the Robo Men from Daleks’ Invasion Earth 2150 A.D. For those of you who are uninitiated, the Robo Men look like a bunch of pensioners into S&M. For reasons unknown, the costume and casting dept thought that hiring actors mainly over 60 years old and dressing them up in baggy PVC outfits and arming them with whips would be appropriate. There is a bizarre comedic set piece in the film in which Bernard Cribbins, who has infiltrated the Dalek spaceship dressed as a robo man engages in some sort of odd food ritual in which they all have to eat weird tablets in some sort of odd unison, clearly to great comedic effect he is out of sync. It goes on for ages and is accompanied by some really weird music. In both of my previously mentioned fan edits, this scene was lengthened. 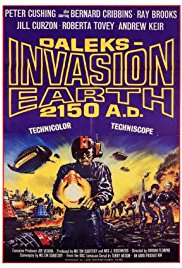 Best bit of the film, in fact best bit of any film, is when Doctor Who stumbles across a dead robo man, who has died of unknown causes standing up behind some cardboard boxes. They inspect his robo helmet and upon opening it up reveal an electronic mechanism which is less complicated than your average doorbell, this is described as being “Hmmm, miniature antennae, highly advanced”… absolute solid gold.

I don’t like the ‘it’s so bad it’s good’ concept. For me things are bad or good. Daleks’ Invasion Earth 2150 A.D. is good — sure it’s cheap, weird, and insane, but all those are good things. The story, is brilliant nonsense, the Daleks want to put an engine on Earth, turn it into a spaceship and drive it about.

Personally, I have mainly enjoyed the TV reboot, apart from the Dalek mythos which in my opinion has been over complicated and ruined. Daleks’ Invasion Earth 2150 A.D. had the Daleks down perfect for me. Love this film. Love pre-TV-reboot-daleks. Love Peter Cushing as Doctor Who.

…Enough is enough, I am watching it tonight!

Love the Star Wars: Knights of the Old Republic games to the point where I named one of my cats Revan after Darth Revan. I have got to say that prior to playing KOTOR 1 & 2 I wasn’t really a Star Wars fan. I watched them all when they came out and had the toys, but I felt like I was a bit too old by the time Return of the Jedi came out and the Ewoks made me sick in my mouth. The reboots didn’t interest me at all and I only played KOTOR because it came recommended as a decent RPG. Personally I think the KOTOR universe, which precedes all of the films is way superior to the movies. It’s heavy dark and the whole story about the Mandalorian wars and useless pompous Jedi council really roped me in.

I have played these games over and over, every class and completed everything in them on XBox, PC, Steam, and XBox One; the whole morality choice thing which is cliché now was so devastatingly cool back then, and still is now. The universe of it seemed much more interesting than the films, especially all the weird Sith history and the force powers were much cooler and varied than the films force choke for Sith or force push for Jedi.

I heard that when Lucas sold off Star Wars to Disney that he didn’t sell them the rights to any of the KOTOR canon, which is such a big loss. I love the new Star Wars films, but I think the films we really wanted to see was a KOTOR film. Kylo Ren is okay, but compared to Malak & Revan he is pretty crap for sure. This will never happen, which is probably a good thing as if it was shit I would go mental.

I have never played the third KOTOR game, as I avoid MMOs like the plague, as I know they would just suck me in and I would never get any music done! 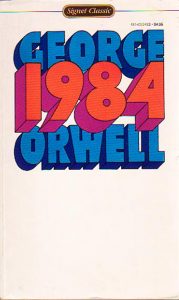 1984 by George Orwell. I read this in 1984, when I was 12, and I won’t say it changed my life rather than shaped it. Unfortunately it appears the most of the UK government also read 1984 when they were young, but interpreted it as a manual as opposed to a dire dystopian prophecy. For me, this book went hand in hand with the punk contemporaries of my time and it opened my eyes to mass manipulation via governments and media so much so it politicised me and inspired me to study the media in college. It’s very sad that everything the book predicted has now happened and become commonplace…. What is even sadder is that if you point that out, the people who will stamp you down and ridicule you isn’t the government but your own peers. Somehow the powers that be won and made the alternative scene proud to be dumb. Ignorance is Strength indeed.

Thanks for the opportunity for letting me rant on about nerdy stuff, I really enjoyed it!