While watching the documentary Freedom Riders with my middle school students last week, one of them stumped me with a great question: was there racial segregation in Connecticut? This led the class on a broad fact-finding mission where we learned some positive and negative things about our state’s history. Here are a few of the highlights: 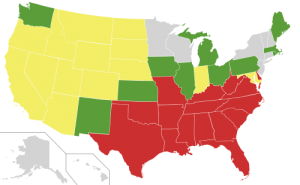 U.S States, by the date of repeal of anti-miscegenation laws:

“US miscegenation” by Certes – Vector map from Blank US Map.svg.  Information from Anti-miscegenation_laws. Licensed under CC BY 3.0 via Wikimedia Commons.

To learn more about the history of racial segregation in different states, check out some cool interactive maps on PBS. Happily, the maps make Connecticut look pretty good in comparison to, say, Mississippi – where there were 539 documented lynchings of blacks and 42 lynchings of whites between 1882 and 1968.  That’s more than one every two months for an eighty-six year period…

I wouldn’t be a good teacher if I didn’t close with an “exit ticket” — comment below and let me know what surprised you in this article.