This April, I read Eating Animals by Jonathan Safran Foer.  While the book didn’t convince me to stop eating meat altogether, the descriptions of factory farms were nauseating enough that I decided that I wouldn’t give my money to this disgusting but tasty industry. 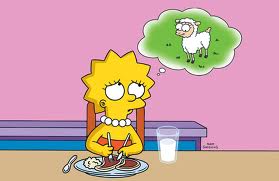 Fast-forward to October.  I’ve been moderately successful in my mission, at least when I’m not drunk.  Or at someone’s barbecue.  Or when my roommates order Chinese food.  And although my fiancée and I split the grocery bill, I do purchase steaks for him, and then lovingly prepare them so they’re ready when he gets home from work.  Now the time of year is approaching where the real vegetarians eat Tofurkey and the fake ones say, “Pass the white meat!”

I have a feeling that I won’t be eating Tofurkey.

This column isn’t a defense of my weak resolve, but I would like to talk about some of the reasons that I can’t seem stay away from meat.  (Shut up, Baldwin!)

First, I don’t think it’s wrong to eat animals.  There’s no inherent pity standing between me and a burger.  I grew up on a farm; my dad raised chickens, sheep, cows, and pigs, many of which ended up as neatly-wrapped butcher paper packets in the downstairs freezer.  I’ve even butchered a few chickens myself, and plucked a ton of them.  The problem with meat, as Safran explains so directly and which I “forget” when I’m tanked, is that industrially farmed animals spend their lives being tortured so that we can go to the store and buy a pack of chicken drumsticks.

“Jess, can’t you get meat from family farms or something?”  Yes, and I do.  Truelove Farms of Morris, CT sells organic, free-range beef and pork at the Stamford Museum and Nature Center farmers market.  The first stumbling block is that the market is held on Fridays from 10 to 2… So I usually can’t go there.  Another problem is that the meat is expensive – probably double what I would pay at the supermarket.  Of course I’m happy to pay extra for an animal that wasn’t tortured throughout its earthly life, but all I can afford is sausage, ham hocks, and ground beef!  (Okay, and London broil if it’s a good week.)  My cooking creativity goes only so far.  On a side note, The Omnivore’s Dilemma by Michael Pollan includes a great discussion of organic, non-industrial farms and the concessions that go along with buying naturally produced meat.

Finally, the ultimate detriment to my vegetarian-ish adventure: being “that guy.”  Refusing my future mother-in-law’s delicious lamb chops, only to get drunk and eat a Chicken Snack Wrap two nights later? Like, really…  Or ordering a spinach omelet at New York City’s best burger joint because it’s the sole meatless item?  Not fun.  Plus, there’s no way I’m going to be able to sit through the future-in-laws’ (or anyone else’s) Thanksgiving without eating turkey.   I don’t want to be seen as a rude guest, and I also don’t want to miss out on the ritual.

So, I’m doing an imperfect job of avoiding industrial meat.  Sometimes I’m “good,” but sometimes real and imagined factors lead me to making excuses. I’m at the point where I might just give up altogether, because what the point of crusading half-assed?  If anyone has some not-so-boring vegetarian recipes, or any tips on where to get locally raised meat, please share!  What I need to do is suck it up, buy some fucking veggie burgers, and stop complaining…  But if you’re ordering Chinese food, lemme get in on that.