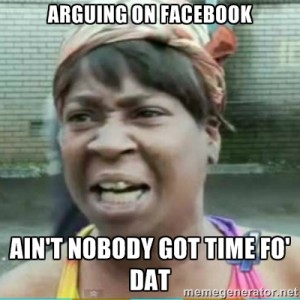 I am on a Facebook semi-cleanse. I can’t give it up completely because I’m the social media gal for the theatre, but I am only using Facebook for messages and other select communications. I am avoiding the dreaded newsfeed.

In the past I tried blocking the annoying people. I unliked pages that would get me all riled up. I even avoided posting things I knew would draw ire. But it only works in the short term. Sooner or later someone else would pop up and annoy me. You can only block so many people.

What was it that finally drove me over the edge? Politics, of course. I am tired of people’s stupid, hurtful, hateful, incomprehensible, mind blowing, mind numbing, opinions. Most of my friends are on the left side of the aisle, and I’m okay with that. But when every friggin post is Obama-loving I start to question their critical thinking skills. Hey, I voted for the guy, he was a far better choice than Mr. Crazy Underpants, but come on! You can’t honestly think our country is in a good place right now, can you?

And, oh, the gun control nuts. Both sides, nuts. But when you post about police brutality and then suggest two posts later that no one needs guns I, again, question your critical thinking skills. And let us not forget, not everyone lives a phone call away from the help they may need when someone is breaking into their home or doing far worse things that I can’t even bring myself to type. If you’re okay with people being helpless there is something wrong with you.

The one that really drove me over the edge was a recurring issue with me and the Facebook. And I won’t say what it is, just in case you disagree, because I don’t want to hear it. But let’s say a real friend (not just a Facebook friend) KNOWS a certain topic is a hot button issue for you. They know you feel strongly and it physically hurts you when people openly bash your belief, but they bash it anyway. They bash it on their page that they have selected only a few real friends can see. To me that is completely lacking empathy, compassion and the basic human decency you’d expect from a friend. It gnawed at my brain and my heart for hours, it took over my thoughts, and then I made the decision. I don’t have room in my life for that shit.

So I stopped looking at the newsfeed. If I click on Facebook and it comes up I cover it with my hand while the other hand clicks the way towards my page, or the playwright page, any page not ripe with crap opinions.

Am I missing out on some good stuff? Probably. But the good stuff never sticks around in my noggin, improving my view of the universe. Only the bad stuff sets up shop in my brain, and I’m pretty sure I’m not unique in that respect, but I don’t need that shit. Life is too short to let the opinions of others ruin your day. Ain’t nobody got time for that!