By The Hipster King

You may not be aware of this but Your Hipster King™ is both literally and figuratively royalty. For one, We are the King of All Hipsters. This much is clear and immune from any examination which might be made with intent to suggest otherwise. Additionally, J.C. is actual royalty. No, really. I’m not kidding or making a loose assertion based on some strange cousins or a made up conversation. I am literally, directly and documentably descended from members of the British Crown. You want proof? Why so doubtful? You didn’t give me this kind of push-back at my Hipster coronation. Fine! Here’s proof: http://news.bbc.co.uk/2/hi/south_asia/4837988.stm That’s was our family turtle. No shit. Happy, now? Also, if I seem a bit “off” sometimes, it’s worth noting that in the early 1600’s our genealogical tranches are better described as “hoops” than “branches.” Cousins may have been fucking cousins but no one can accuse us of carrying on with commoners and that’s what’s truly important. Isn’t that so?

Why does any of this matter? Because of the many ways in which legitimacy is established, perhaps the one which We most enjoy (indeed, benefit from) is tradition. Thus, We enjoy manners and etiquette quite a bit. So, isn’t it time we had a talk about manners, North America? Yes, let’s. We will try to not be crass as you will try to benefit from our superior tutelage. We will be gentle, you will be yielding as a young girl in her prime (Man ‘O War reference. Metal content, resolved.) We will be humble, you will be open to gentle correction. So, with these tenets in mind, We suggest… No, say….

PUT YOUR MOTHERFUCKING CELL PHONE AWAY BEFORE I SMASH IT AND FEED IT TO THE SHARK AT THE MARITIME AQUARIUM WHILE YOU ARE FORCED TO WATCH.

Do I love the technology and beeping and blipping cell phones? Of course I do. After all, how would I monitor Twitter? How would I not sign on to Facebook? How would I roll my eyes dismissively at the over-effusive content of 5 star Yelp reviews? How would I browse Brooklyn Vegan while on the toilet in the office? Believe me, I know how passé an “internet rant” about cell phones appears. Hell, even the use of the term “rant” makes me a little queasy (Hipster alert: I’m predicting that any day, now, ‘retro-Denis Leary’ will make a comeback solely on his whole Andrew-Dice-Clay-on-training-wheels, “I got two words for you….OHHHH!!!” routine. You heard it here, first) but, I got two words for you, “don’t and care, OHHHH!!!!”

I misspent a considerable about amount of my youth in places like the Lower East Side of New York City and various stops along what we will euphemistically refer to as “The Orange T Line” in Boston. I know what it looks like to see a nodder in serious need of a fresh bag of D on a park bench. You know what it looks a lot like? The 45 year old, full grown adult male sitting on a bench somewhere in Greenwich who can’t look up from his god damned iPhone for 2 minutes to help get his idiot kid’s foot unstuck from the jungle gym at a playground. Are you thinking that’s too specific an example to be fictional? You’d be right. This guy is single minded in dicking around with what the fuck-ever he’s doing on his god damned cell phone; to the point that he needed to pretend that he was teaching his kid some sort of character lesson about self-reliance. “Come on, Clapton. Man up, buddy! You can get your foot out of there!!! I’m not going to come over there and help you. You can do it!” If you’re going to give the kid abandonment issues so that you can check Facebook, you at least owe that weird little bastard the truth. “Daddy is just too god damned lazy and, like an easily preyed upon fish, entranced by the shiny thing to bother helping you. Also, I only bought that shirt for you so that my adult friends could see you in it. I mean, really Clapton…. Do you think that I buy you and your sister, Homlette, Brooks Brothers clothes for YOU?!? Who does that?” Fucking man-children.

I wish I were exaggerating. Just this morning, I drove by a guy in Norwalk and thought, “Great! It’s about time that Norwalk got some publicly visible smack-heads hunched over on benches.” I mean, you don’t get to be the next Bridgeport by just wishing for it and listing “federal tax credits for new public housing construction” as the third largest revenue item on your budget sheet. You need the intangibles. On looking more closely, I saw his real problem….high on iPhone. It’s also entirely possible and likely that public housing tax credits are, indeed, the single largest revenue line item in Norwalk. 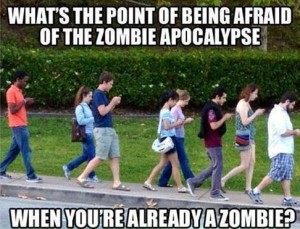 Another great bunch, are the Zombie Walkers. I know you’ve seen them. Crossing the street, blissfully unaware. Doing their best to walk into glass jarred displays in the grocery store. Preternaturally and inevitably in your way. Necks slack, plodding feet staggering, their irrationally large saddle bags disguised as pocket books swinging adversarially. Listen, cell phone dopes… as it is, sheer probability and statistics suggest that you’re of average to less than average intelligence. Why play life on hard mode? You guys aren’t so good at walking in a straight line when you’re NOT playing Candy’s Corky Crank or whatever that thing is. Put your god damned cell phone away and pay attention to where you’re walking. I know. It sounds like an absolutely insane request. Calm down. Once you’ve mastered walking in a straight line without being blinded by your need to fire off text messages, we’ll work on doing the same thing only with driving. One day at a time.

By far, without question, my favorites are the people who can’t attend a concert, poetry reading, parade or public bus ride without documenting it through their phone. Let’s think about what this says about you, here. You’re at a live entertainment event with actual artists and performers and just to make it totally unrealistic and purely an exaggerated fiction let’s say that it’s also dark at this event. You don’t want to actually watch the event while you’re there, though. You want to film it (in the dark) with a lens the size of my pinky fingernail and a microphone that has the dynamic ability to make Maria Callas sound like she’s running a fart machine inside an old-school iron lung. I guess you figure that you’ll pay attention later or something? I don’t know you, cell phone maniac, and frankly, based on your uncontrollable need to touch and look at your cellphone all the time, I really don’t want to. Here’s something I do know, though, without question. That video you took? The one of Matchbox 20 from the nosebleeds? With the audio that sounded like a midget carpenter, trapped with a running sawzall inside a metal garbage can and screaming because the whole operation was being thrown down the stairs? You’ve never watched it. You won’t ever watch it. The picture that you took of the Garfield the Cat balloon from the UBS parade in Stamford? You’d be shocked to learn it’s still in your phone. 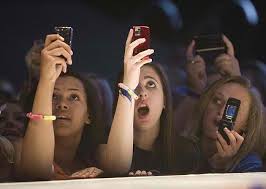 It’s the infantile nature of this behavior which really gets Your Hipster King’s™ turtle. When we are very small children, we are taught that pee-pee and poo-poo are done in private and without talking about them. If we ask why, it might be explained to us that doing these things in public is considered rude and anti-social. So it should be with cell phones. I don’t care if you need to check your messages but excuse yourself and go into another room to do it. Otherwise, I may decide that it’s ok to pee-pee in the corner of your living room. I’ll be pretending to still be carrying on a conversation with you but I won’t really be paying attention. I’ll be staring, rapt, at my own pee-pee and the magical golden stream of pee-pee which is arcing out onto your couch. Social contract, mate. Honor it.

Believe me, you look like a moron with your eyes glazed and your half opened mouth, audibly breathing and your face lit up by the blue death-glow of your cell phone screen. I know, I know…you saw the commercial of the impossibly hot, vaguely hipster girl and she looked so cool and potentially doable with her phone but that’s make-pretend. They gave her that phone. She doesn’t go for a ride in bare feet, with that knitted hat and take cool pictures out the window of the Subaru while Nick Drake plays every fucking time there’s a cool sunset. Neither do you. Plus, you’re a dude. Help god damned Clapton get his foot out of the hole in the jungle gym. Trust me. Nothing will still be going on on your phone after you’re done.

And now, you wait. You wait to see Your Hipster King™ in public violating the very rules which he rallies against. We would remind you that it’s rude to engage in “gotcha etiquette” and in the (kinda) words of Richard Nixon, “When Your Hipster King™ does it, that means that it is not illegal.” Did I just spend 10 minutes whining about other people’s cell phone use? You bet I did. Is this a tired topic, itself worthy of the same accusations of infantilization leveled at it? You’re damn right it is. Is the obnoxious first world privilege of ignoring your kid because of your cell phone really only outdone by a flaccid complaint about it on the internet? Yeah. Does even this whole section not disclaim what came before it? Probably. Definitely. I wonder what’s going on on Instagram. Brb. Gotta run.

Stay tuned….next week, my spine tingling take on fedoras or maybe “popped collar polos.” Not really. Time to get serious.