You’d think as a librarian, I’d be a very organized reader: start a book, finish it in exactly one week, and slide it back into its designated spot on my Dewey-Decimal-organized bookshelf.  But alas, that is not the case.  I’m now in the middle of reading two nonfiction books, a novel, and a cookbook! 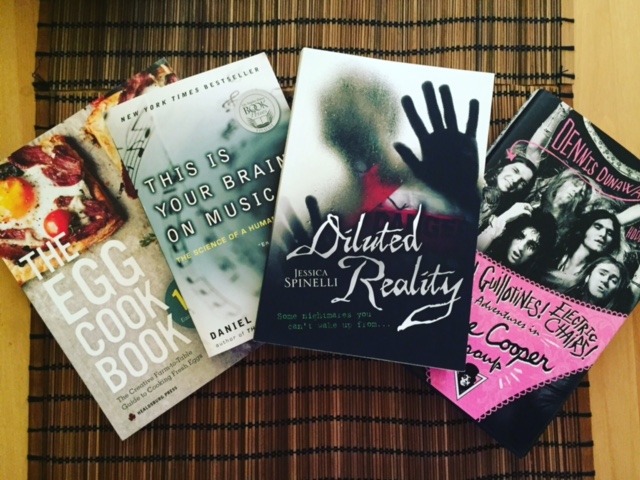 The first one I started was This is Your Brain on Music by Daniel J. Levitin. I borrowed it from my fellow blogger Christopher Baldwin, who reviewed it early this year.  (You can read his review here.)  The book is about the neurological processes that go on while people listen to music — super-interesting, but also a read that requires some effort!  I’m learning a lot, but I can only get through five or ten pages of science facts at a time; this book is living on my nightstand and I read it before bed.

I’ve got two books in my beach bag right now: Diluted Reality by local author Jessica Spinelli, and Snakes! Guillotines! Electric Chairs! My Adventures in The Alice Cooper Group by Dennis Dunaway.  The first is a gritty novel about an abused and abandoned kid who grows up to become addicted to drugs.  Xavier is searching for self-worth — and halfway through the book, I’m not sure if he’s going to find it.  (Although he sure manages to get laid a lot!)  Spinelli’s debut work shows a flair for the dark and tragic.  Fingers crossed that Xavier can beat his demons!

Dennis Dunaway is technically a local author as well — the original bassist for Alice Cooper, or The Alice Cooper Group as he religiously refers to them in the memoir, Dunaway has been a Stamford resident for many years.  He even played a Rock the Vote show to help out the Stamford Democrats’ recent Bernie campaign!  (And yes, the blog has interviewed him —  Baldwin strikes again!)  It’s crazy to learn how different the music business was in the early 60s.  The band that would later become Alice Cooper started out as the “house band” of a rock club in Phoenix while they were still in high school.  Do house bands even exist anymore?  Or would that be a “house DJ” now?  Or a Pandora subscription….  Young Dunaway rubs elbows with Jimmy Paige and hangs out with Jimi Hendrix like it’s no big deal.  The band is still on its way up where I am in the book and I’m curious to see how the Group becomes lone Alice.

And finally, there’s The Egg Cookbook, put together by Healdsburg Press.  With three or four eggs a day from our backyard chickens, I really needed some new egg recipes!  Unfortunately, I screwed up the only one I’ve tried so far: an egg baked inside a tomato.  I didn’t let the broiler get hot enough, so I ended up with burnt cheese on top and a cooked tomato full of raw egg.  Whoops…. This book has seriously improved my scrambled egg game, though, and I like how it has an introductory section on raising chickens.  Planning to try the Kitchen Sink Quiche recipe tomorrow, so hopefully I will have some cooking successes to report on!

Anyhow, it’s a good thing that adults don’t have to do summer reading projects because I’d be cramming them all into the last week of August.  My other fellow blogger Tom Pizzola is going to be mad at me because there’s no way I’ll have Everybody Loves Our Town back to him at the Valient Thorr show!  I promise, it’s next on the list…. 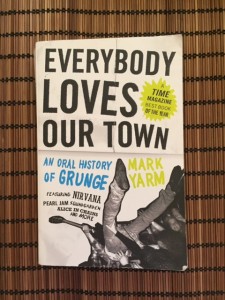 Disclosure: This article contains Amazon Affiliate links.  If you buy these books from the links in this article, AltCtrl will get three cents for our ice cream fund.