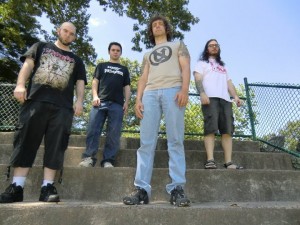 I was recently tasked with the pleasure of writing up local metal project Murder Castle. Instantly, I imagined an 8-bit NES cartridge, with a cartoon mad scientist cackling wildly, next to a Jessica Rabbit-inspired seductress, holding a dopey sleuth by the tie, with the eponymous estate looming in the background, gloomily lit by a flash of lightning. After first listening to the debut album Heretic’s Fork and then enjoying a conversation with vocalist and songwriter Bill Klopfer, my mark missed by miles. While acts like the beloved Nasty Disaster and Manowar have engaged us with a self-aware, tongue-in-cheek rendition of the absurdities of metal, that is not what’s going on here. This music is all of the evil and none of the frivolity you could take from its plainly-stated name. In Bill’s own words, “This album is about torture at its peak!”

To enlighten those who might not have known, there was, in fact, a murder castle. I cite Klopfer’s telling, as I had been among those who blissfully had no idea this ever existed. An individual by the name of H.H. Holmes (not to be confused with Hunter Hearst-Helmsley) purchased the property across the street from his own business, and erected a three-story building to open as a hotel for the World’s Fair in Chicago, in 1893. Holmes relocated his pharmacy and opened several other shops on the ground floor. On the second and third floors he made his office… and over a hundred windowless rooms, linked by oddly-angled hallways, also containing doors opening to brick walls, staircases leading to nowhere, and countless other maddening and torturous constructions. Holmes, America’s first publicized serial killer, used this upside-down dungeon for amusement, and tried to construct more in other locations, but fortunately failed. After his capture, conviction, and eventual hanging, the Chicago press dubbed his property the Murder Castle. 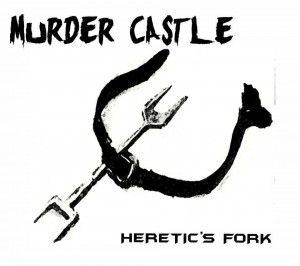 In elaborating on the band’s decision to use this story to define their project, Klopfer said, “As we all know, the hardest thing to do when starting a band is coming up with a name. Almost everything is copyrighted in some shape or form. We decided on using the name Murder Castle simply because we love the story of H. H. Holmes, and because we thought it sounded very metal, dark, and twisted, in a simplistic way.” Bill also admitted to sharing a desire for expression that may, in some warped manner, reflect that of Holmes’s… “Music is an outlet for us, and is a catharsis to many musicians. So as we release our tension in a poetic, destructive fashion, it’s as if we are creating our own torture chamber, in our own mind, fictionally. This music is our Murder Castle. It is our outlet away from society, and away from actual reality.”

The concept pervades the lyrical content, and Klopfer’s primarily-screamed but melodic vocals sound both the tortured and the torturer, conveying raw and violent emotion. The music embodies the feeling of lurking malice and promised lunacy that you’d expect after referencing the source material. This metal capably straddles the lines between the distinct doom, death, and thrash genres, while maintaining its own identity, and still paying respect to its forefathers. It recalls Slayer and Candlemass and Death, while acknowledging Black Sabbath and Corrosion of Conformity and Crowbar. But the sound of this band is very much its own —  and if you have the stomach for the evil, it rewards your fortitude.

Each of the musicians has a varied background. Klopfer claims membership in a thrash band called Penitentary and an industrial project called Painstead. Drummer Simon Tuozzolli owns a well-regarded studio called UP Recording in Seymour, CT (which comes highly recommended, to those musicians reading this currently). Each member of the band brings a different mentality; in Klopfer’s words, “Half of us come from different generations… Our drummer and bass player grew up in the late 80’s and early 90’s, so there’s an influence there, whereas the guitarist and I are ten years younger. What’s great about this band is that we’re on the same page. We know what we want this band to sound like and we all get along very well. The writing process is very easy. I think we have captured the sound of Murder Castle with our first release… It will only evolve from here on. I already have 8 new songs in the works and the sound hasn’t changed, it’s only evolved.” Despite the fact that each member is balancing several projects, there is clearly a devotion to Murder Castle that each bandmate invests into his own performance, it is without a doubt a labor of love.

Your next opportunity to check out Murder Castle live is only days away; they take the stage at Cherry Street Station in Wallingford on Saturday night, along with Twitch Angry, Agrippa93, and Symphony of Malice. Find them on Facebook to check out their music, or take my word for it, but definitely get there if you can. With an entire album’s worth of music already written for the next release, it’s only a matter of time before these guys assert themselves over The Scene. Don’t be a poser later; start digging them now.