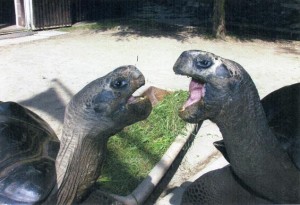 One of the reasons I became a playwright was that I didn’t need anyone else to do it. As an actor you’re depending on someone to hire you. As a playwright you write whatever and whenever you want. And I do.

Almost two years ago I wrote a short play about a couple of turtles living in an urban preserve. Somehow I got the genius idea to turn that into a musical. At Theatre Artists Workshop, where I’m a member, we do a thing called “Word of the Week.” Someone picks a word and we write a scene or monologue using the word. So in the beginning I was using the “Word of the Week” to help me write the musical. I wrote scenes and lyrics and I’d bring them to the workshop and the actors would perform them cold, made up melodies and all. I did that maybe three weeks before the script took off and and I finished writing it on my own.

Fast forward a bit and someone asks me about the “turtle musical” and I say something like, “yes, I just finished it. Now I need someone to do the music.” And, voila, she offered to do it. So I send her the play, we meet and she plays a few songs for me. Not remotely what I was thinking when I wrote the lyrics, but I’m open to the possibilities. She changed some lyrics, and some of what she came up with was great, some didn’t fit in my mind but I had no trouble compromising on some things, as long as they didn’t effect the story.

Fast forward again and we rehearse it with actors, I almost cry it’s so moving. But it’s also so short! Not nearly long enough to be considered a full-length musical for children. So my creative brain takes off on a thousand tangents figuring out where the story can go.

Somewhere in here the phone calls begin. I hate the phone as it is, but I hate bad connections worse. The composer would call and I couldn’t understand what she was saying, or she’d tell me her ideas about the characters, how to make it longer, etc. Once she even called to say we’ll talk later. Mind you we were meeting once or twice a week for a couple months now. But the constant intrusions into my time and my brain were starting to get to me.

Then, it happened. Early one morning I answered one of her emails with some random thoughts. And that afternoon she called me, while I was out taking pictures of birds because that’s the best time for a phone to ring, and she actually said, “I’m calling to discourage you from writing (insert random idea here).” In my entire life I have never heard such an absurd sentence. Discourage me? Once again we had a bad connection and I said we’d talk later at the workshop. And we did. That was where she said my play wasn’t really about nature. Add in a few phone calls (I actually had to turn off the ringer, she was making me crazy) and an email that expressed a desire to change the “big event” in the play and I was ready to explode.

Early the next morning, 5:00 AM because who can sleep when their baby is being kidnapped, I answered her email. I said I was concerned, it seemed she didn’t understand the play, no one is going to tell me how to write my play, this isn’t working for me, etc. This was followed up by a phone call that somewhat smoothed things over. But I hate the phone, like I said, and wasn’t really expressing myself well. But it was made clear it was my play, I did like the music she was writing, but it’s my play and no one is going to tell me how to write it. I’d rather throw it out and start over than have someone tell me where my play should go.

Is this really a collaboration? It’s as close as I’ll ever get because I’m never doing this again. As magical as some of the results can be I am not a fan of frustration and I certainly don’t need to roll any negative feelings into my creative process. Ain’t nobody got time for that.