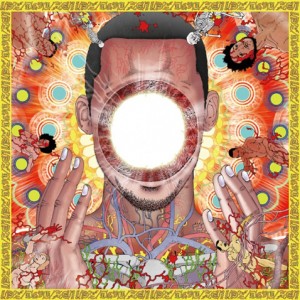 I admit, I’m not much a fan of the r&b or hip-hop genres. There are a few isolated artists that I admire, but I’ve never been able to delve into this sort of music fully. I was cynical about branching out my musical tastes when I was young and close-minded. Rap and heavy metal were on opposite ends of the spectrum, and that was that. But then I got older and wiser. I’ve merely brushed the surface of hip-hop and I like most of what I’ve heard. But in order to get to this point, I needed a gateway drug. Flying Lotus (a.ka. Steven Ellison) was that guy. His genre is whatever the fuck he feels like doing. He’s written four albums so far, each of them baring its own distinct personality. You’re Dead might be my favorite so far. Compositionally, the music is very spontaneous. Jazz, hip-hop, electronica and r&b collide in a free-flowing collage of conflicting passages. But despite its anarchic and linear nature, the music makes so much sense as a complete piece. It’s a celebration of urban music in all of its forms. It takes you on a rollercoaster ride through jazz clubs at 3am, breakdance showdowns in back alleys and private bedrooms in inner city apartments. It’s a soundtrack for a day in the life of a love-making, trash-talking, spiritually aligned robot of the bustling metropolis.

Disastrously beautiful – that’s how I would describe this. The four mammoth tracks in this masterwork of doom level my ears with collapsing mountains and move my heart with visions of Valinor. The strength of this contrast is apparent in the album’s final 18 minute opus, “Marrow.” This track alone is worth the purchase. It’s the music that Dante must have heard in Paradiso when he ascended the final sphere of heaven to meet his maker. It’s heavy, but with the weight of experiencing benevolent divinity. I’m not over-hyping this either. The other three tracks are just a bit beneath the finale, but remain excellent. The riffs are slow and meandering like the grunts of a sleeping cave giant shifting in his sleep. The aura is as stoned as a Woodstock revival. The length of each track requires a lot of patience and appreciation for what doom metal tries to accomplish, yet when you catch on to the vibe, the length isn’t an issue. I can melt into this music when I’m sober. I can only imagine what a little smoke could do.

I’ve already written a pretty lengthy review of this album on the site, so I’ll keep comments brief. This collaboration between heavy metal mad scientist Devin Townsend and Che Aimee is quite possibly the most original collection of music on this list. It’s what country music would sound like if it was founded on the Moon. It’s got twang, spacey atmosphere and a sly sort of quietness that I’ve never really heard before. It’s a long album, and a slow grower perhaps, but anyone who’s hungry to hear something truly unique should look into this.

Nobody is making experimental music like Swans these days. NOBODY. They’ve managed to stretch the rock format to its very limits. Stretch any further and these tracks would fall apart into a random pretentious mess. But Swans know how to use repetition as binding glue. At the core, Swans is ugly, sinister stuff. It’s all disjointed hardcore riffs; screeching violins; percussive clangor of bells and wood blocks and the disturbing, rambling voice of Michael Gira. But then there’s the hypnotizing pull of a galloping bass line, the trance of primal war drumming, the warmth of sweeping organs and the cries of a mellotron. These repetitive melodic elements organize the avant-garde ugliness into something immediately affective and mesmerizing. There’s something exotically primitive about the songwriting process here. It’s almost like the music is trying to conjure up some kind of dangerous entity. A couple of instruments begin the process of evocation. A musical line is repeated over and over. As the conjuration enters its mature stage, a growing anxiety turns a corner into madness. Eventually, the music morphs and molds into a monstrous abomination of sound. Necromancy takes many forms throughout the album’s playtime. Ghostly echoes of an ancient pagan order dribble under a stormy ambience. Lunacy drools in cathedral attics. Lovecraftian monsters call to the Old Evil in valleys of reeking death. There’s nothing nice about To Be Kind, except of course for the fact that after one full sitting, you’re emotionally wrecked enough to go straight to sleep.

This album will top many lists this year. And there’s one simple reason for this – fucking honesty. I’ve never heard anything as naked and personal. This is singer-songwriter Mark Kozelek’s open diary. He recalls in detail about how when he was young kid, a girl that touched his penis while they were listening to Pink Floyd’s Animals ignored him in the school halls the following day in “Dogs.” He explains his grief over punching a kid at grade school and breaking his glasses in “I Watched the Film The Song Remains The Same.” He explains the story of a man who had mercy killed his wife in a hospital and was facing jail time in “Jim Wise.” He even shares the fact that he’s probably never going to get over the eventual death of his 75 year old mother in “I Can’t Live Without My Mother’s Love.” The playing is a bit jaunty and the lyrics roll over these songs like a jabbering sort of spoken word. In many ways, the album is imperfect. And that’s really the selling part behind all of these stories from Mark’s past. Why should a musical autobiography be a perfectly produced thing? All of the awkwardness, sadness, insecurity and humor in this album reflect reality. Reality is just a series of fucking accidents, coincidences, injustice and pure blind luck. Blind luck, much like the surprising success of Benji.